Three years ago, Real Madrid dropped the trophy under the bus. Can she forgive? J. A. "Ireland" Marsano's exclusive interview with the Copa del Rey.

Ireland: So I'm here with you, Copa del Rey, and may I just say you are looking absolutely beautiful.

Copa del Rey: Thank you, Ireland! The reconstructive surgery was conducted by only the finest jewellers and silversmiths. And I'm practically as good as new. Hardly any pain, though when it's damp, my pedestal does hurt just a bit to remind me of my brush with death. I still do physiotheraphy once a month.

Ireland: I'm so glad to hear that you're almost good as new. May I call you Copa?

Ireland: Now then, Copa. Before we start, let's just clear up a small matter that I believe has caused you emotional distress over the last 3 years.

Copa del Rey: That was why I agreed to this interview.

Ireland: Any truth to the rumour you jumped?

Ireland: I believe you.

Copa del Rey: WHY WOULD I JUMP? I had FINALLY been won back by Madrid. It was one of the proudest moments of my life. You have no idea how hurtful it was, lying in the trophy-recovery-unit, being worked over by the silversmith, to hear that people suspected I was suicidal. It was Sergio Ramos! He dropped me! Under a moving bus!

Ireland: I can see you are still emotional. Cup of tea?

Copa del Rey: I only drink Champagne, but thank you. 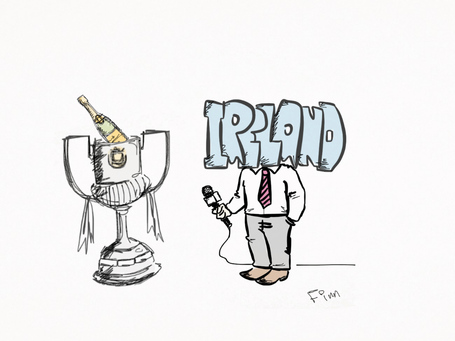 Copa del Rey: Yes, well. The injuries he caused me! 14 separate injuries! I've been told that in human-terms my injuries were a shattered left-leg, a broken hip, 3 broken ribs, right collarbone broken and a godawful concussion. You can't even imagine the suffering, Ireland. And then to be told that there was a rumour I might have done it on purpose in a fit of despair! I just...I just...

Ireland: Of course, and I hope you don't find me indelicate, it's just that Real Madrid fans are worried that you haven't forgiven Madrid yet. I mean, last year, when you wouldn't come home with us, some fans were starting to worry.

Copa del Rey: Well, it's difficult. Forgiving I mean. The concussion made it hard for me remember what had happened.

Ireland: That must have been a blessing though.

Copa del Rey: I suppose it was. But of course, like any survivor of an accident, I was curious to find out what had happened to me. And when I summoned up the courage to watch the footage...I...couldn't...I...just...[sniffles]

Ireland: If this is difficult, we don't have to continue.

Copa del Rey: [Gathers herself] No, it's fine. As I was saying, I couldn't believe it when I saw Sergio Ramos come off the bus and I heard him say "Está bien! Está bien!" to a reporter enquiring after my health - it most certainly was not "Está bien"! It was injury to 14 different parts of my anatomy! And he's seemed like such a nice boy when we met on the pitch!

Ireland: My commiserations. I'm sure it was only the guilt speaking.

Copa del Rey: Well, I hope so. But it was very hurtful to my feelings. I mean, the day had started out so beautifully! I got to meet the King and Queen and catch up on a year's worth of gossip. Madrid won me back after so long. That handsome captain of yours lifted me up into the air and the crowd cheered! The players danced with me in the dressing room, and posed for pictures. It was like being Queen for the Day!

Copa del Rey: And the best part was that the club gave me a very nice Champagne - probably a Veuve Clicquot, to which I'm particularly partial. A very nice vintage. I'm not going to mention names, but a couple of teams who have won me in the recent past...well. Let's just say they don't know a thing about nice Champagne. In fact, I'm convinced..I don't want to mention names. But I think a certain club across town may have tried to trick me once with a sparkling white. As though a respectable cup like me wouldn't know the difference between Champagne and Moselle!

Ireland: How shockingly disrespectful. But as you were saying, the evening had started well?

Copa del Rey: It was wonderful, Ireland. Just wonderful! They flew me home first class! I even had my own seat! And then, being carried up to the top of the bus by the adorable boy with the big brown eyes and the big smile...

Copa del Rey: That's the one! Such a charming boy, always laughing and joking. And then the crowds were cheering me and...and...well, it's a bit of blur after that. [Sniffles]

Ireland: [Passes tissue] I'm sorry. Sharing that must have been difficult. Take your time.

Copa del Rey: I just need fans to understand that life as a cup is not easy. You end up in a different trophy cabinet every year. Some are just not as nice as others. You put up with indifferent Champagne. You only really get one big outing every year. I mean, it's not an easy life!

Ireland: I can see that. But Copa, do you think you can forgive Real Madrid? Or at least, assure us that the second rumour is also false: you haven't cursed the club and refused to come back with us in 2013?

Copa del Rey: [Indignantly] Certainly not! That's pure ignorance speaking. Everyone knows silver cups can't carry curses! I would never curse Real Madrid. I love Madrid. It really was like coming home. You have no idea how much I love your trophy cabinet. So many shiny big European Cups to talk to. In fact, La Sexta and I are the best of friends. But at the end of the day, the players have to play hard and have to win. I have to be earned you know, with a good performance. I can't just go home with any old club that just shows up. Play well, and I'm yours!

Ireland: Understandable. And I'm sure the players will do their best. Any final thoughts?

Copa del Rey: Actually, yes. When I was injured, it was very distressing to hear that the Ajax Amsterdam players threw the Eredivisie trophy under their bus a few days later. Thankfully, the bus missed, but players can't be doing that to their trophies. Even if the Eredivisie trophy is only a plate and not a proper cup like me. We bring happiness to millions of supporters, and all we ask for is a little Champagne and a fun evening once a year.

Ireland: Quite right, Copa. I'm sure we'll take your words to heart. Thanks for clearing that up for the readers of Managing Madrid. Looking forward to tomorrow?

Copa del Rey: [Giggles] Oh yes! It'll be so nice meeting the Queen again. She's very charming. She was kind enough to remark that the reconstructive surgery left me looking as young as ever. Just make sure Sergio Ramos doesn't get to hold me on a moving vehicle if I get to go home with you!

Ireland: I'm sure he won't be allowed to. Thanks for chatting.

Many thanks to reader FinnTheHuman4MM for a sketch of the interview between Ireland & Copa.