I wasn't feeling nervous when I entered Mestalla, but by watching that unbelievable atmosphere I realized the true importance of that game

It was a hot day in Valencia. I woke up and decided to pick up the press credential at the Paseo de la Alameda, few minutes away from Real Madrid's Fan Zone. There, the Spanish Football Federation got the name of this site wrong, so the pass showed that I was working for Managingsport.com. Come on! It's not that hard! Anyway, after taking a few minutes to figure out what was wrong, I made my way back home, but I also walked by the Fan Zone to see how the atmosphere was. The game was still 6 or 7 hours away, so not many fans were gathered there yet, but it's true that you could see a lot of Real Madrid shirts on the streets of Valencia's downtown.

It was good to confirm that a whole lot more of fans were at the Fan Zone at 6pm CET. Some pop and rock bands were performing live on stage, but I decided to take a look outside to see how the fans were singing and showing their support for Real Madrid. 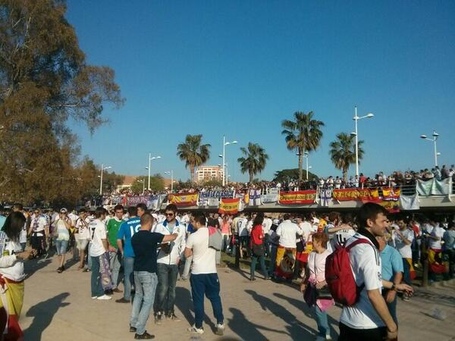 The flags were hanging all across the bridge which Real Madrid's bus had to cross to get to Mestalla. The fans were drinking beers quite intensely and one could feel that the game was almost there already. At 7:15pm, I decided to enter Mestalla to find my seat, set up my computer and get everything ready for the match coverage.

When I went to Mestalla for Real's 2-3 win last winter, I found that Valencia's stadium had a very small press room, and I before the game I wondered how the Spanish Federation was going to fit all those journalists there. I soon realized that they built a provisional press zone, with Ethernet connectors and regular plugs to charge your computer. Phew! I thought I was going to run on my battery for more than 5 hours! 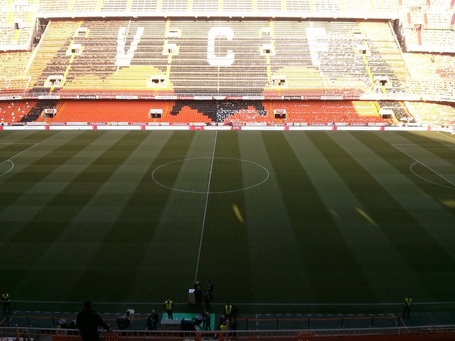 As you can see in the picture, nobody was there, and I soon regretted my decision of leaving the FanZone so early, especially since the fans were about to greet the team's bus on its road to Mestalla. Anyway, time flew by after meeting some fellow journalists that I know from my trips to Madrid.

The game was about to start, and the fans displayed their Hasta el final, vamos Real banner. 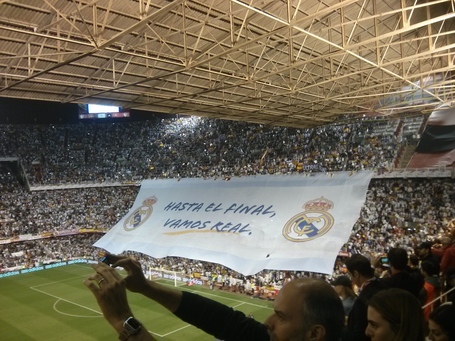 The FC Barcelona fans were seriously beating Real Madrid's. Their singing was much louder and one worried about that getting into the players' skin. Luckily enough, Real's fans stood up to the challenge and delivered shortly after the ref kicked-off the game.

What happened between that whistle and the one which ended the game has been written already. I was amazed by Isco's performance, and Coentrao, Di María, Benzema and obviously Bale have to be right up there too. Great team display although Barcelona really pushed hard after equalizing the match.

The celebration was fun, with the Barcelona fans leaving the stadium and Real Madrid's singing the team's anthem. 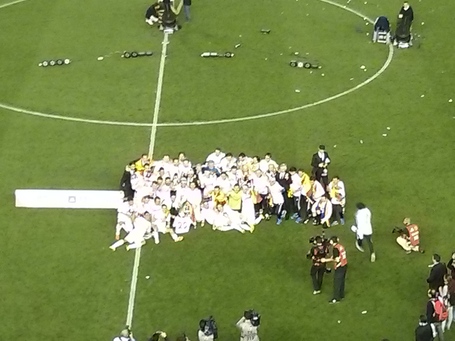 There are better pictures. But this one was taken for you, Managing Madrid readers. And there are better videos, but I wanted to get you closer to Mestalla's atmosphere.

It was an unforgettable night, and obviously my best match covering Real Madrid. One that I will always remember.