Josh Zeitlin and I (Gabe Lezra) sat down with Real Madrid legend Fernando Morientes at Heineken's Share the Sofa event in Manhattan, and chatted about Madrid's tie with Bayern, some prospects on the youth side, and his favorite memories playing for los blancos.

Share All sharing options for: A Conversation With Real Madrid Legend Fernando Morientes

Update, April 29, 11:44 AM EST: Fernando will be live chatting with fans throughout today's game as he takes over the @Heineken_US Twitter handle using #ShareTheSofa.

Fernando Morientes doesn't look a day over 30, I said to myself as I approached the Real Madrid legend at the penthouse of the Flatiron building in Manhattan's eponymous district. Managing Madrid co-founder Josh Zeitlin and I were attending Heineken's "Share the Sofa" promotional event--we were invited, don't worry--and we were both excited (and, after a couple beers, feeling verbose).

"El Moro," as I grew up calling him, was a star for Real Madrid from the mid-1990's through the early-2000's (he was culled right before Beckham came, along with Vicente Del Bosque and Claude Makelele--a tragedy. Oh, and Ireland would want me to add that he was Madrid's best aerial player, and was removed right before the team acquired the world's best crosser). He scored a fantastic goal for Madrid against Valencia in the final of the Champions league in Paris, and, perhaps even more famously, scored five goals against then-Primera side Las Palmas.

NOTE: We conducted the interview in Spanish, so some things may be lost in translation.

Gabe Lezra: Thanks so much for chatting with us today--it's an honor to meet you.

Fernando Morientes: Nice to meet you both.

GL: We wanted to ask you what you think of this Madrid—Ancelotti’s, that is—compared to Mourinho’s.

FM: Well, all Madrid teams have such good players, and the managers are really in charge of the style, but this Madrid team won the Copa, they still have a chance in the Liga, although it’s more complicated, and I think that the general goal is to win the Champions.

GL: Talking about the style—do you feel like the style of the first team flows down to the youth teams?

FM: When you’re on Real Madrid you know that the first team has a very offensive mindset, where you’re always trying to play on the opposing team’s side of the field, playing a high press—all of that has a lot of influence on the youth system, which tends to be the same.

GL: Have you noticed a change in style from the Mourinho era to the Ancelotti era?

FM: Well, there are different things, of course, which have to do with each manager’s style. But that’s the beauty of football—that each coach can implement their ideas on a team as competitive as Real Madrid, with players as good as those on Real Madrid.

GL: Right, of course. So moving to your job now—are there any players on your team right now (Juvenil B) that our readers should keep an eye out for?

FM: Well sure, but I can’t just say one—because they might read this! But yeah, there are a couple players that we’ll definitely be talking about in the future. They might not necessarily play for Real Madrid, but some will certainly be able to make a living playing football.

GL: So you enjoy coaching?

GL: So we have a question from our readers—do you remember the game where you scored five goals against Las Palmas?

FM: Yeah yeah yeah, there are some moments in your career that you never forget—and scoring five goals against a first division team, and in the Bernabéu, well it had a lot of repercussions, and it’s definitely one of the things I remember most.

GL: Another reader question—we wanted to know if there’s any other moment that you remember specifically?

FM: Well, you always remember the big moments, which are normally related to the titles we won. The Champions, for example, especially now that Madrid is right there about to make it to the final, I remember the three titles, the special moments in those semifinals, the goal in Paris. Obviously there were a lot of years, so it’s a lot to pick from.

GL: So what do you think is going to happen tomorrow?

FM: I think it’s going to be a heart-attack game. I just hope that Real Madrid makes it—and hopefully Atletico too, because a Real Madrid-Atleti final would be the dream final for most Spaniards.

GL: Would you change anything from the first leg?

FM: No, I don’t think so. It was a good result—it was great that Bayern didn’t score in Madrid, and the key thing will be for Madrid to score in Munich, so Bayern has to score three times.

JZ: You’ve played against Bayern in the semifinals a couple of times, right?

FM: Yeah, we played a couple times—I mean it’s a clásico of the European leagues. We’ve never played in the final, but at the end of the day the big teams have to come face to face.

GL: Thanks so much for speaking to us, and welcome to New York!

FM: Than you both, it was a pleasure to meet you.

And that was it. We're planning to ask him--on twitter tomorrow, according to our awesome Heineken contact Luka--what he thinks about coaching Enzo Zidane.

Oh, and we got a signed ball: 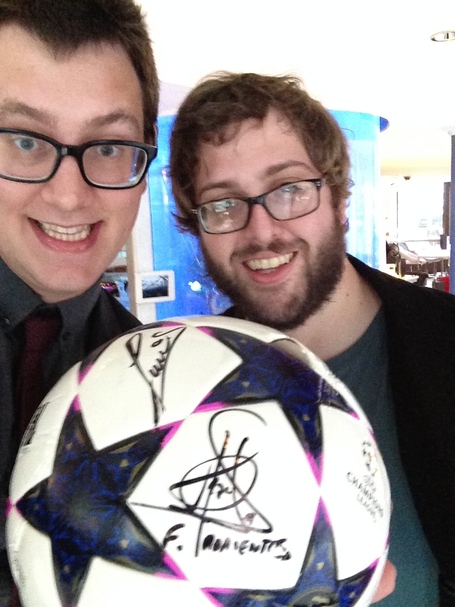