How Will Real Madrid Line Up Against Bayern?

We discuss both team's projected lineups

Share All sharing options for: How Will Real Madrid Line Up Against Bayern?

A lot has been said about how Real Madrid should line up against Bayern. Ancelotti said during Monday's press conference that his team is going to be offensive-minded, that Real are going to attack. It makes sense. An away goal is much more valuable than a home one, and some coaches are playing a lot more offensively away than in home. If Real Madrid manage to score, Bayern need three.

So, with Bale and Cristiano fully recovered, I expect Ancelotti to bring back his old 4-3-3 formation featuring the whole BBC. That way, Carletto would have a potential game-changer like Isco on the bench if Bayern find a way to score first. On the other hand, Guardiola might start Lahm at right back once again. He did alright in the midfield at the Bernabéu, but Rafinha failed. If Lahm finally starts at right back, Martínez will likely play deep, with Kroos and Schweinsteiger having freedom to control and dictate the tempo of the game. The Schweinsteiger-Di María fight will be a very important one and Ancelotti should expect the Argentinian to harass old Bastian.

This is how everything would look on the pitch. 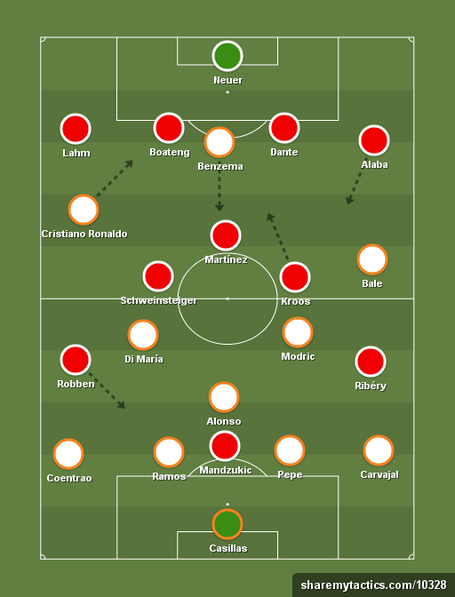