The young defender has a world of talent, will he get enough minutes to utilize it?

Share All sharing options for: Real Madrid's keys to the Undécima: Raphael Varane

However, a knee injury at the tail end of last season forced him to miss 13 games and delayed his return to the pitch until October. A series of average performances by his and our lofty standards, including getting absolutely schooled by former Barcelona winger Alexis Sanchez in a 2-1 Clasico loss, followed his return from injury before he once again picked up a knock on his knee which forced him to miss an additional 13 games until January. He returned for a second time but the performances remained the same. Average, decent, but nothing even remotely resembling the dominant and precise force he was the previous season. This was exemplified in a 2-2 draw against Valencia late in the season where Jeremy Matheiu beat him to a header as Rafa didn't even attempt to make a play on the ball (though his vision may have been obscured).

As things were looking gloomy for Rafa and Real Madrid heading into the Champions League final and Pepe being ruled out due to injury, Varane put in his finest defensive performance of the season when it counted the most as Real Madrid beat Atletico Madrid 4-1 in the final. Additionally, aside from getting bullied by Mats Hummels in the air in France's 1-0 loss to Germany in the World Cup quarterfinals, Rafa put in an outstanding performance in nearly every other game for France, having played the full 90 minutes in all but one game. If he had a knee injury, he sure isn't feeling the effects of it anymore.

Statistically, Rafa had a solid, if unspectacular, season. Like with the France national team, clearances have been a key strength for him as well as a nearly 90 percent passing rate. For a central defender, especially a young one, his passing and composure is of elite level. Not only is this shown in his passing, but also his incredible knack for playing physical ball without picking up any fouls or cards. If you want anyone tackling Leo Messi in the box on a breakaway, it's Raphael Varane. 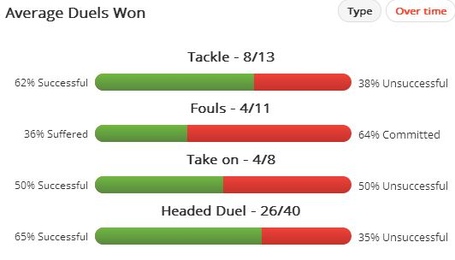 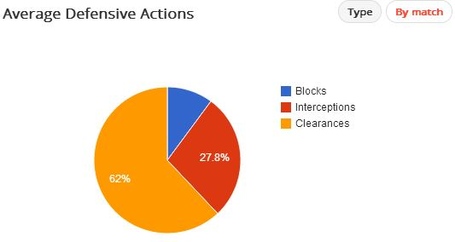 So what can we expect from Rafa this season? Well, it's pretty clear: he has to beat out Pepe for the starting spot. Sergio Ramos is arguably one of the two or three best CBs in the game so he's not in danger of losing his place. Pepe, on the other hand, will be turning 32 this season and is much closer to the end of his career than the beginning. While Pepe has been a rock this season and often carried the back line as Sergio struggled and the LBs were in flux, his temperament and age are two factors working against him. Nacho is the fourth choice CB but he won't be leapfrogging Varane for minutes any time soon.

What does Rafa have working for him? Well, he's 21 and there's still an incredible amount of room to grow even though he's already considered world class by many. He's a large kid but his massive strides and surprising agility often allow him to make up lost ground to attackers. However, he usually doesn't have to recover much as his positioning is that of a seasoned veteran and he's among the best at tackling cleanly as picking up fouls and cardings are a virtual non-concern with him. He's an ideal partner for Ramos as Sergio has shown to be a threat in attack so therefore Rafa can hang back and deputize the open spaces Sergio leaves behind when he runs forward to help the offense. Basically, he's the opposite of Pepe. Almost always a mild-mannered and reserved guy, he, however, showed a surprising bit of fire in his belly as he went after Diego Simeone in the Champions League final and let's be honest, we all loved seeing the kid stand up to that man.

In terms of areas in need of some improvement, his aerial game, while impressive in Madrid's beatdown of Barca in the previous season, needs a bit of refinement as the opposition found it relatively simple to go after him in the air. His frame developing with age should help him in this aspect as defenders will find it harder to bully him on jump balls. He also looked a step slower and a bit more timid this season, though that may be due to natural apprehension following a serious injury. Despite all of this, he just needs as many minutes as possible to regain the confidence he had in 2012-2013 as an undisputed starter. If he so quickly developed in the 2012-2013 campaign then imagine what he could turn into with a full season's worth of minutes ahead of him and especially with Fernando Hierro signing on as assistant coach.

We all know what Rafa is capable, we've seen his stratospheric rise into a world class centerback as he bossed around players of Messi's caliber, but there's still room to grow for the young Frenchman. Given Pepe's age and form at the World Cup, I feel confident that Varane will see a great uptick in his minutes this season and could win the permanent starting spot for himself by midseason (barring injuries). There have been rumors that he's unhappy due to lack of playing time and that Chelsea and Manchester United are circling around the club like a bunch of vultures, but none of those rumors have any confirmed quotes or sources nor do they acknowledge that much of his lack playing time was due to injuries. I don't see the club letting him go elsewhere any time soon so look for Rafa to eventually win the starting spot over Pepe and cementing himself as a defensive rock for Madrid not only this season, but for the foreseeable future as well.