Rumors in the last week and 24 hours have linked Real Madrid to both.

By now, we've all heard that Real Madrid have been tied to Monaco's Radamel Falcao. His face, alongside with James Rodriguez's, has been plastered all over the Spanish newspapers with various quotes of varying levels of truth placing him in Real Madrid this coming season. Naturally, when a striker of his well-known name gets linked to your favorite club you can help but feel a little bit giddy at the thought of such a fantastic player joining.

Or can you. Lucas outlined his reasons why he thinks Falcao wouldn't be a great fit, but let's dig in a little bit deeper. 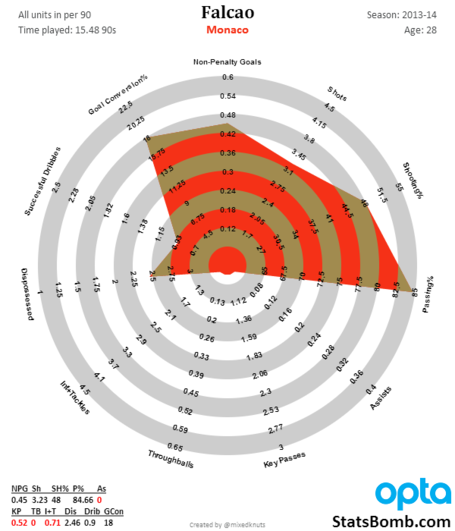 The image above is via the excellent Ted Knutsen from the equally excellent website StatsBomb. Without delving too deep into the graph, one can see that Falcao's game was quite limited this past season. That could be for a number of reasons: new country, new teammates, new style of play. However, even if we give him some leeway these numbers are concerning.

The truth is that he's never been much of a creator for others. In the last five years, he's registered only 13 assists. Think about that. Gareth Bale in his first season at Madrid alone registered 16. You can't truly blame Falcao's numbers on his teammates alone since his key pass numbers have also always been low, meaning that he's not really looking to involve others. Defensively, there's nothing to speak of as well, he's not going to be harassing the opposition when the ball is lost and he'll most likely not be dropping deeper into the pitch to help defend. He dribbles virtually the same amount as Karim Benzema (.8 dribbles/game compared to .7/game for Benz) but turns the ball over virtually twice as much (2.5 turnovers/game for Falcao compared to 1.3/game for Benz).

So what does he do well? He scores, as evidenced by his two seasons at Atletico Madrid where he racked up a combined 52 goals. The problem with this figure, however, is that he was the primary penalty kick taker so this figure is boosted by that fact. He's a solid finisher but nothing particularly spectacular. He's also not afraid to lead with his head in challenges and possess a strong shot from distance.

Overall, with Falcao you're getting a big name striker who, this season, had his knee torn up and who would cost at least 40m if not more given that Monaco would probably not be too keen on making a huge loss on their investment.

Now onto what I think would be a FAR wiser investment of money to buy a player who would actually add variety to this attack. I don't have a graph for Mandzukic but a quick look at the numbers show why he'd be the best cost-effective option.

When you think of Mario you immediately think of his height. Given that Benz is more of a threat on the ground and not the air, Mario would be another strong aerial addition as he averages 2.7 aerial duels won per game. For point of reference, Falcao averages 1.7/game and Benz averages .5/game. He's also virtually on par with Falcao and Benzema when it comes to dribbling, but is the best of the three when it comes to holding on to the ball as he averages less than one turnover per game (.9/game)

Mandzukic has also been widely praised for the strong work shift he's willing to put in. Aside from battling in the box for balls in the air, he's an incredibly tireless defender who is more than willing to drop way back in the pitch in order to win balls back. There will be no questions of effort when it comes to him. Were he to sign, Madrid could roll out Benzema to be the creative force of the front three and the usual threat he is on the counter with his passing, or go with Mario when they know that they'll possess aerial superiority over the opposition and need someone to harass the opposing defensive line. Truly a well-rounded attack.

The problem with Mario is whether or not he'd be content with being part of a rotation. News last night from the ever-unreliable Guillem Balague stated that Mario has already come to terms with Real Madrid pending Morata's exit and would cost in the 20-25 million range. Given Ballague's track record when it comes to transfers, I'm very hesitant to believe this but it doesn't hurt to fantasize. Additional rumors have already placed Mandzukic in Atletico Madrid's camps to the tune of an 18m transfer. Yes, these could all be more of the same silly rumors that we've all grown tired of, me included, but it's no secret that this club will need a second striker if Morata heads out this summer.

Either way, to me the choice is clear. A striker who has the big and well-known name but is actually very flawed if we dig deeper, or the more workman-like striker who isn't flashy but would provide a more balanced attack with a bigger effort in all areas of the pitch at potentially one third of the price of Falcao. I know, with no hesitation, which way I'd go.