I feel that we live in an age of now. When something amazing happens we tend to rush to call it the most incredible occasion ever. When someone supremely talented comes along we hurry to place them at the top of the mountain as the greatest. In the process, we have a habit of overlooking those trailblazers of years past who paved a path for today's superstars, those players who elevated clubs to the halls of the elite for all time and who have irrevocably changed the sport for the better.

Alfredo Di Stéfano was one such player.

Born in Buenos Aires, Di Stéfano played for a number of clubs before joining Real Madrid, including an awe-inspiring River Plate side and an even more incredible Millonarios Fútbol Club of Bogotá in 1950. The subject of his transfer to Real Madrid is a controversial one and one which has been part of the club's folklore for decades (much to the dismay of rivals Barcelona). Interesting to note is that prior to his arrival, Real Madrid hadn't won a single title in Spain for 20 years.

However, once at Real Madrid, the trophies started pouring in. With Real Madrid he won eight Spanish league titles, five consecutive European Cup Titles in which he scored in all five finals (still a record), one Intercontinental Cup, one Spanish Cup, five Pichichi awards, two Ballon d'Or awards and one Super Ballon d'Or. In the process, he scored 307 goals in 403 games with Real Madrid and his 49 goals in 58 European Cup games stood as a record for decades until it was broken by Raúl, Andriy Shevchenko and Ruud van Nistelrooy.

Once Ferenc Puskás joined the club, he and Di Stéfano formed arguably the greatest 1-2 punch the world has ever seen on a football pitch (with Paco Gento and Raymond Kopa serving as more than able-bodied sidekicks). With Puskás scoring at will and Di Stéfano being able to play at any position on the pitch (legendary manager Miguel Muñoz stated that with Di Stéfano you could have the best player at multiple positions all rolled up in one footballer), Real Madrid waltzed through opposing defenses like a hot knife through butter. The most striking example of this is the performance which is widely considered to be the single finest performance ever put on by any club: the 7-3 victory over Eintrach Frankfurt in which Di Stéfano scored three and Puskás scored four.

The man was total football personified. The opposition was no match for his physicality, the guile he possessed, his endless reserve of stamina, his raw speed, the power with which he played and the will to win which transformed this club from a mediocre organization to the most winning club in history. Tactically, he was every manager's dream come true as he played from box to box, both a strong contributor on defense while an unstoppable dynamo on offense. He commanded his team through respect and hard work (once telling new signing Amancio Amaro that he needed to sweat to earn the Real Madrid badge on his training kit), marshaling those round him into a dynamic, but organized unit led by the Blond Arrow. He is considered by most to be one of the four greatest footballers ever alongside Pele, Maradona and Johan Cruyff. It might seem to be an exaggeration, but the Don, alongside with Cruyff, was truly the most complete product ever placed on the pitch. Pele was a remarkable scorer and Maradona was a wizard with the ball, but neither offered nearly as much on both ends of the pitch for the full 90 minutes as the Don.

Unfortunately for the Don, he was the greatest player who never had the opportunity to participate in the World Cup. Although he represented all three of Argentina, Colombia and Spain due to players at the time not being tied down to national teams on a permanent basis, his teams either refused to participate, never qualified for the big tournament or he was ruled ineligible and it remains the only missing trophy in his fully stocked cabinet. However, that in no way should take away from how monumental of a player he was and how he towered head and shoulders above all other competition. Pele called him more complete than himself and Maradona, while Maradona said he was "El maestro de los maestros." 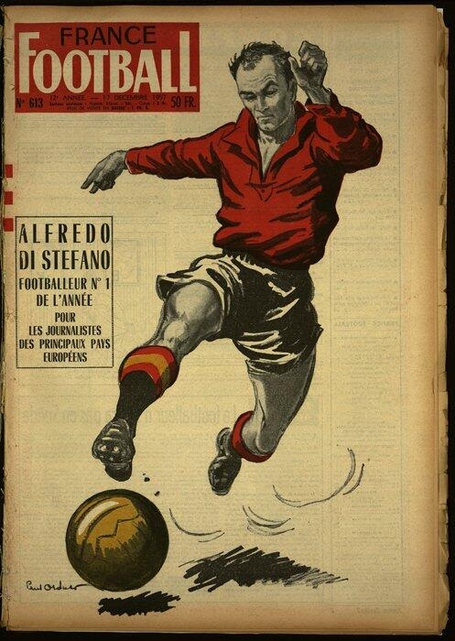 There are a number of anecdotes about his life after Real Madrid; from his kidnapping in 1963, to his feud with Santiago Bernabeu, to his managerial career, which included a less-than-successful stint at the head of Real Madrid. However; all that pales to the superstar he was on and off the pitch and how he transformed this club. There is a wonderful section in Sid Lowe's Fear and Loathing in La Liga book which discusses the genius of the Don. A passage stood out to me:

Helenio Herrera famously claimed that if Pelé was the lead violinist, Di Stéfano was the entire orchestra, while Bobby Charlton, whose Manchester United team were knocked out of the European Cup by Real Madrid, remembers: ‘He totally controlled the game. Every time you looked , he had the ball. Everything happened around him. You looked at him and asked yourself: "how can I possibly stop him?"’ The answer, much of the time, was that you could not – and Di Stéfano knew it.

Although the news of his passing is incredibly sad, we can take one small silver lining in his last few months. The man was able to witness the club lift the trophy which had eluded them for years, the holy grail which he five times made his own: La Decima. We can at least be grateful for that moment.

"Often, even with high temperatures I was able to convince the coaches that I have to enter the field. Football - a great game, and when you're in a great club, then every game for you - a privilege. And exactly the same privilege - give the game everything you have".