How will Real Madrid line up in the UEFA Supercup?

Xabi Alonso is out and Ancelotti might as well try to deploy both new signings Kroos and James in the match against Sevilla. The answer? A classic 4-4-2 that could turn into a 4-2-4 offensively.

Share All sharing options for: How will Real Madrid line up in the UEFA Supercup?

If reports are to be believed -and that's a big if- Carlo Ancelotti is going to start both James Rodríguez and Toni Kroos against Sevilla. Cristiano Ronaldo has recovered successfully from his several physical problems and is aiming to be in Ancelotti's lineup as well, so the Italian coach will likely deploy a 4-4-2 formation that will most certainly be a 4-2-4 when Real Madrid have the ball - that is most of the time-. 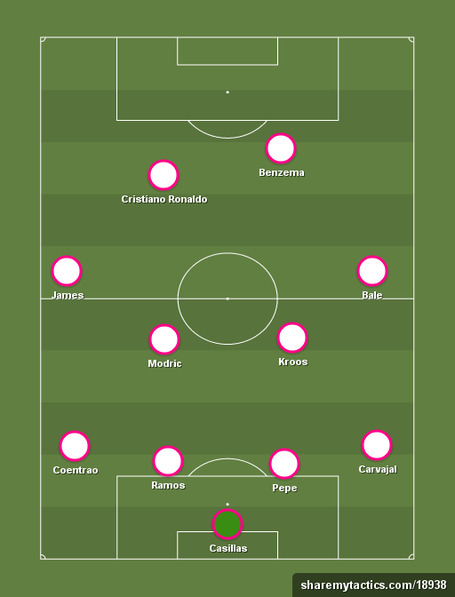 Under this 4-4-2 formation, Modric and Kroos will need to show some defensive commitment. Kroos is certainly not that kind of player, but we've seen Modric playing in Xabi Alonso's role some times and perform brilliantly. One way or another, Real's full backs will need James and Bale's helps, because Unai Emery's Sevilla are always a very dangerous team on open field. While neither one of them is a pure defender or hard-working player, Bale and James will be able to stay in their positions when needed.

Carlo Ancelotti could still start Illarramendi and Isco. After all, they have completed the whole pre-season with the squad, while James and Kroos are still trying to gain some fitness. That decision would make a lot of sense, but this UEFA Supercup would be a great showcase to prove what both James and Kroos can do. Furthermore, Real Madrid will play the Spanish Supercup against Atlético de Madrid just one week after this match. Considering that Simeone's squad should arguably be a most physically demanding challenge than Sevilla, Isco and Illarramendi might as well get a chance to show their worth against Koke, Mandzukic and company.

Ancelotti has plenty of options to choose from. This is just one of them, and even if this starting lineup is confirmed he could still try to play with a 4-2-3-1 formation that would be even more attacking-minded.

Next Up In Soccer