The Other Side of Cristiano Ronaldo

Ronaldo plays an important role in Real Madrid's build-up play providing contributions in multiple aspects of transition and open play that extend beyond laying on the finishing touches.

Share All sharing options for: The Other Side of Cristiano Ronaldo

Denis Suarez's attempted through ball is intercepted by Dani Carvajal. The Real Madrid right back immediately plays a pass to Cristiano Ronaldo who is positioned in the central right midfield space. The Portuguese surveils his surroundings as the ball travels its course and instantly locates the exploitable open region of the field to his left Toni Kroos and James Rodríguez are attacking. He makes a one-time lateral pass to Rodríguez and embarks on a strong run down the wing maintaining awareness of the opposing players and his teammates. He hurriedly signals for Bale, who receives the ball from Rodríguez, to meet his run and the Welsh does so exquisitely: unleashing a magnificent cross that Ronaldo guides into the net.

A Fiorentina corner is headed out by Asier Illarramendi. The ball falls to Ángel di María's feet a few metres outside the box who makes a one-touch play with a pass to Rodríguez. The pass is short but Rodríguez makes an effort to reach it and lay it off into Ronaldo's path who is sprinting down the middle of the pitch. Ronaldo utilizes his pace and momentum to glide past an opposing player all the while maintaining a close focus on di María's run down the right wing. He releases -- just before breaching Fiorentina's half -- the Argentine and persists with his sprint (keeping wide) leaving the far pass option open. Di María executes his straight run well actively staying aware of Ronaldo's trajectory. He ultimately lays off a perfect assist for Ronaldo who scores decisively from close range.

Ronaldo is the counter attacking player to a degree. As the above scenarios show, his physicality complements his instincts in a seamless fashion when the team is in "Turbo" mode allowing him to participate in the initiation and development stages of Madrid attacks. Where some can only match his quick thinking and decision making, others can only compare to his pace, acceleration, power, and strength. He is the ultimate combination.

Ronaldo's intuitive understanding of the dynamic nature of zones enables him to effectively anticipate potential attacking schemes and envision their likely outcomes: or more specifically, the most efficient combinations that will result in shot generation. As a goal scorer principally (from an introspective view), he is often concentrated on involving himself in ways that maximize his final move opportunities. His interaction with evolving patterns during gameplay is systematically regulated by an innate drive to precipitate a conclusion to developing plays.

Consequently, Ronaldo's passing can seem a little aggressive as he pursues tight or unavailable (appearing to be) possibilities (as previously explored, Di María is a similar kind of player in this regard). A great example (another milder illustrative instance would be Benzema's first goal against Schalke away last season) of this occurred in the second half of the European Supercup as shown below: 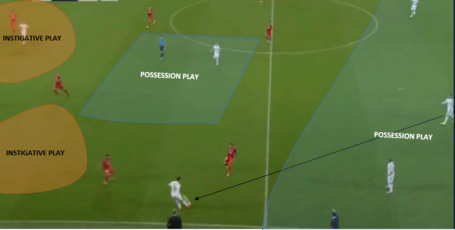 Ronaldo receives the ball from Ramos next to the touchline. In this position, there are many clear opportunities for him to maintain Real Madrid's possession and enhance control of the game through ball retention:

Ronaldo foregoes the safer possession plays and instead attempts to redirect Ramos' pass to James Rodríguez (who is off-screen to the Madeira native's left)...

This play -- as with trying a long pass or cross to Benzema -- is extremely risky (relatively) due to the numerical disadvantage, disconnected support, and constricted operating space. However, these "invisible" pockets in the field are often prime conditions for creating disorder in the opposition's defensive organization. Although the windows of opportunities are limited, there is an inherent destabilization factor that can be effectively leveraged to stimulate potent attacks.

...Ronaldo's flick-on is knocked away by the outstretched tackle of an opposing player. The stray ball is collected by Kroos who, after brief deliberation, releases Benzema. The Frenchman identifies Ronaldo's run and makes a directed pass. Ronaldo controls and scores from a tough angle. The entire sequence (starting from the captured image to the goal) lasts all of ten seconds. Ten. Seconds.

Needless to say, relying entirely on the highly unpredictable form of attacking guile Ronaldo proposes as the primary offensive design mechanism is not a sustainable strategy. That level of volatility can only exist in an environment where the framework is based on concepts of defensive support and control. This is something Ancelotti has been trying to establish at Real Madrid -- alluding to it quite explicitly numerous times -- by increasingly shifting responsibility (or more appropriately re-allocating) from specific individuals to the entire group or certain subsections.

To successfully implement such a philosophy requires the availability of players (wide variety) that can fit the many roles that will be essential in different circumstances. Kroos, for example, showed he can liberate the attackers from the stringent requirements of driving the pace of the game. The German becomes a revolving focal point that is responsive and proactive enough to accept autonomy in certain situations without ever losing the link with the remainder of the team. The presence of our celebrated midfield dynamic duo (Luka Modrić and di María) is imperative in such a context.