Real Madrid looked set to cruise to to three points at the Anoeta after taking an early 2-0 lead, but were thoroughly embarrassed to the tune of a 4-2 defeat.

1. Real Madrid still cannot defend set pieces, and their issue only seems to be getting worse. Madrid were again clueless and caught day dreaming and allowed Sociedad to take control of the match off a corner kick. Then, rather predictably, los Merengues conceded on another corner as the players seemed more interested in protesting for a hand ball rather than marking Carlos Vela. While neither of these goals were directly Iker Casillas' fault, his inability to step up and claim corner kicks is troubling. Unfortunately, the 6'5 Diego Lopez is not here to save the day. However, Carlo Ancelotti must be thinking of turning to the other keeper on his squad, Keylor Navas. While Navas is the same size as Casillas, he is much more adept at disrupting set plays with his brave and calculated approach. Switching goalies, however, will not be merely enough. Ancelotti's player must commit to defending set pieces with the same ferocity that they commit to attacking them. 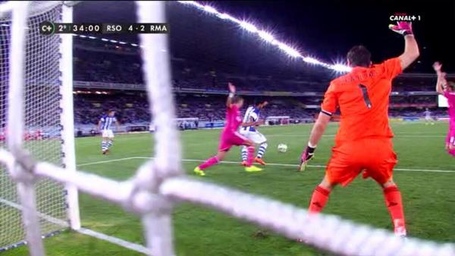 2. James Rodriguez is not ready to be a starter- yet. With another dreadful performance that saw him waste possession, lack creativity and play out of position, James Rodriguez has made it clear that he is not ready to assume regular minutes for Madrid. Ancelotti is clearly under pressure to play the €80 Million man, but he needs to pull him out of the lineup. Madrid's four man midfield today was an utter disaster in the second half, with none of the four creative players being particularly interested in defending. Khedira's tough, balling winning presence is sorely missed, and with James playing as poorly as he is, he is the one who should be replaced. The Colombian has shown his brilliant ability, but only in very slight flashes. His time will come, but not quite so quickly.

3. Will the real defense please stand up? Or at least show up? Real Madrid's defense seemingly went on holiday in the Basque region, rather than deciding to be anywhere near Real Sociedad's build up play. The entire back-line was caught out of position time and time again, and unlike last weekend against weak opposition in Cordoba, Sociedad were clinical with their chances and punished Real Madrid. Madrid had multiple opportunities to put the game away after taking a 2-0 lead, but the moment their defense finally cracked, the floodgates truly opened. Their poor play, combined with Iker Casillas' timid play, is always a recipe for disaster. Ancelotti only further complicated matters with his head-scratching decision to replace Carvajal with Arbeloa, who is somehow still a viable option for the European Champions.

4. Cristiano Ronaldo is still very much Real Madrid's main man. After free-flowing, team oriented football gave Real Madrid a 2-0 lead, Ronaldo's absence was almost forgotten. Madrid were unable land the knockout punch today, which maybe shouldn't be a surprise given the nature of the players on the field. The lack of a clinical, lethal goal-scorer was ultimately Los Blancos demise. Without the Balon d'Or winner, there was no one willing to step up and take control of the game. With Ronaldo's questionable long term fitness, this will continue to cause for concern for Carlo Ancelotti.

5. Real Madrid must clear up their squad immediately. With the loan of Chicharito Hernandez reportedly done, Madrid's gaping need for an alternative striking option may be solved. However, the midfield's compatibility continues to be an issue. Hopefully this can be pinned on early season blues, but with Atleti's looming visit, it is of the utmost importance for this to be sorted soon. Further up the pitch, depth was also lacking today. While Ronaldo's return will in turn also strengthen the bench, the need for Jese Rodriguez is glaring. Ancelotti has said that the young Spaniard will be returning soon, which is welcomed news for the team.

It is still very early in the season, but it is not a season that has started well for Real Madrid. The massive upheaval in the squad, paired with the hangover from la Decima has resulted in a lackadaisical start. Look for Carlo Ancelotti's men to really step their game up after this International Break.