What will Ancelotti line up against FC Basel?

Even though the Italian manager would like to make some rotations, the team's recent struggles will force to deploy his best available starting XI.

Share All sharing options for: What will Ancelotti line up against FC Basel?

First and foremost, Ancelotti announced that Iker Casillas will still be Real Madrid's starting goalkeeper if we're able to read between the lines and connect the dots of what he said during Monday's pre-match press conference. The Spanish keeper was whistled by his home fans after conceding yet another goal off a set piece, but Ancelotti still believes he's ready to defend Real's goal even though some fans seem ready to see what Keylor Navas has to offer.

With Carvajal still recovering from his injury, this might be another match for backup right-back Álvaro Arbeloa. He played well against Atlético, offering intensity and good positioning to recover the ball, but his offensive production is very limited.

Kroos, Modric and James should have another chance to start and prove they're ready to be Real Madrid's starting midfield, while the BBC will try to get back to scoring form.

So here's what Ancelotti will likely go for. 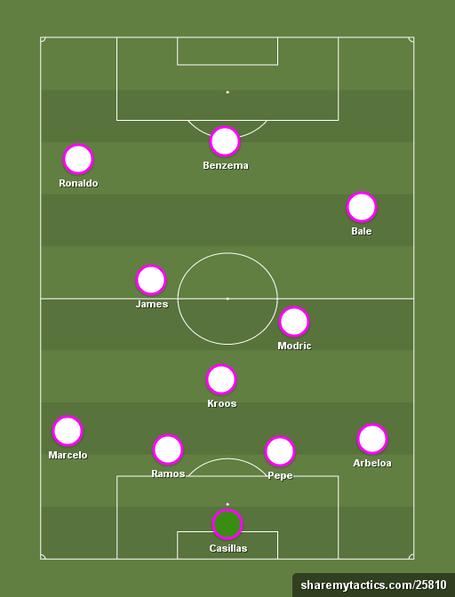