At first glance, Toni Kroos and James Rodríguez didn't look to match up too well. But together they shone against Basel.

Share All sharing options for: Why Toni Kroos and James Rodríguez are not a mismatched duo in Real Madrid's midfield

In yesterday's Champions League opener, Carlo Ancelotti trotted out the same formation which floundered against Atlético. It was a curious choice, given how mashed up the center of the pitch was just a few days before, but after reviewing the game, his new formation is starting to make sense.

Toni Kroos didn't pad his stats yesterday, but he was everything he was brought in to do and more. At Bayern, he had a lot of free reign to move forward and attack, but lately he's been the closest thing Madrid have to a true defensive, holding midfielder. 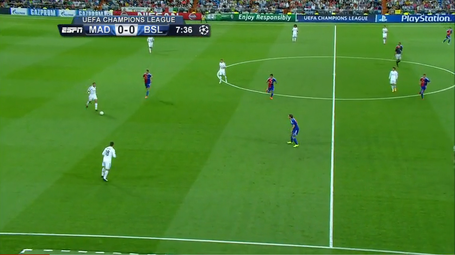 Here's Kroos in a pure DM position. Modrić is ahead of him, as are Marcelo and James. This was early in the game when Madrid's formation was very pronounced. Kroos would go on to get comfortable in the yards surrounding the centerfield circle. 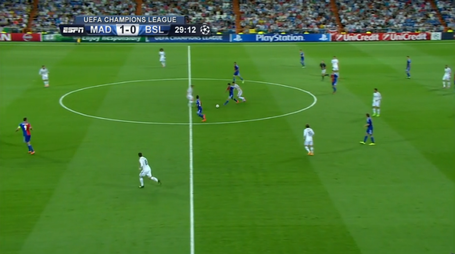 Just seconds before Bale's goal, Basel were countering, and Kroos rushed up to the dead middle of the pitch to close it down, with some help from James who was backtracking (which he, believe it or not, made a habit of in the game, but I'll get to that). If Kroos had hesitated to press, he wouldn't have been able to spring the attack. But he made haste, dished it off to Modrić, who delivered it to beautifully Bale, and the rest is history. 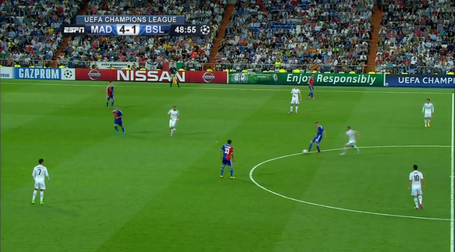 This is early in the second half, after the game was put away and Madrid's formation was much more free-flowing. Here you'll see Kroos pushing forward, forcing Basel to recoil their attack.

The gist of this is to show Kroos is not only able to be a stop-gap in the defensive midfield, but his responsibilities also include forcing turnovers in the opponent's zone. This role is Sami Khedira's bread and butter, and Kroos filled his national teammate's shoes quite well. 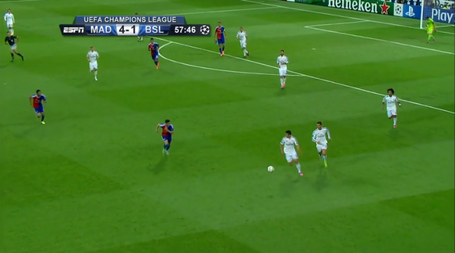 Here's James pretty far back in defense, having just won a 50/50 ball. James' flair and footwork are well documented, but I was glad to see him willing to do some dirty work yesterday.

Just behind him is Nacho, who was never afraid to go forward. A few seasons ago right-back was the thinnest position in the squad. Now, Ancelotti has three options in Carvajal, Arbeloa and Nacho, all of whom have different abilities. Also, notice how Kroos wants nothing to do with going on the attack.

We can't understate how devastating Xabi's exit was emotionally. Bayern showed up, pulled down our drawers, gave us a noogie, and stole our favorite holding midfielder before we could even react. But it seems Madrid may have pulled a fast one by snagging Kroos from Bayern early in the transfer window at a great price. The difference being Xabi is nearing the end of his career while Kroos is just getting started.

Toni Kroos fits the mold of the modern German midfielder -- he's composed, versatile and has an absolute cannon of a shot. If I'm Carlo Ancelotti, I'm doing backflips thinking of how else I could use him.

James did a little bit of everything, and it's reassuring to know he can get back and defend if called upon.

Yesterday we also learned Asier Illarramendi isn't totally forgotten after all. He quadrupled his minutes total for the season after coming on and playing...16 minutes. At that point in the game, not a whole lot was happening. 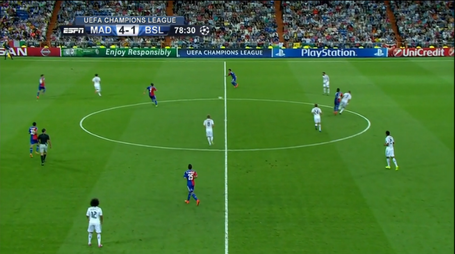 Here's a pretty clear look of how the formation looked after Illarra came on. Kroos had more freedom to roam forward since Modrić was off, and Illarra sat deep. Not a whole lot happened near him. No passes were made past him, nor did he distribute the ball forward too much.

Ipso facto, bringing Illarra on was practically a nothing move. The best case scenario would be that Ancelotti wanted to get his confidence up and has plans to play him more going forward. But given the way Illarra plays, he needs to start and get serious minutes to leave a real imprint on the game.

FC Basel aren't a juggernaut, but they're regulars in the Champions League and weren't phased by the competition or environment. After initially rolling my eyes at yet another James-Kroos midfield, it turns out they might be a great pair after all.