The Portuguese scored four goals against Elche, that is known. But what else did he manage to do?

Cristiano Ronaldo can't stop scoring. After putting on a show against Deportivo, a game in which he racked up a hat-trick, he decided to improve his performance and complete a poker. It's true that Ronaldo benefited from taking two penalties, but his overall performance was arguably better than the one against Deportivo. 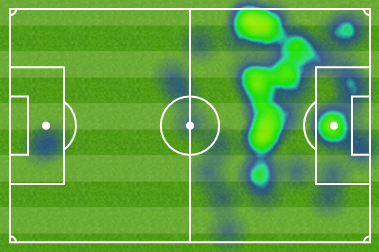 As you can see in the image above, Cristiano Ronaldo is slowly turning into a centre-forward. Ancelotti's trend of playing with a 4-4-2 formation in some scenarios and Benzema's mobility help Cristiano Ronaldo's conversion, but the French striker did not feature against Elche. That way, Ancelotti decided to play with his usual 4-3-3/4-4-2 with many players changing positions constantly. One of them was Ronaldo, who occupied the left wing more often but decided to join the centre of the pitch as well.

Ronaldo's numbers against Elche are brilliant. He's by far, the player who had more shots on goal, with 11 tries. All of them but 1 were on target, meaning that Ronaldo kept Elche's goalkeeper busy. 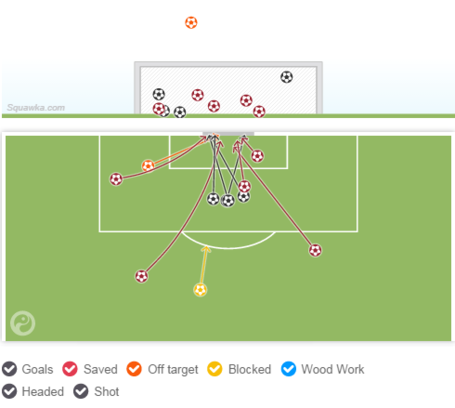 His shot chart, provided by Squawka, can't be any better. It's true that four of his shots were too centered, but to have such an outstanding accuracy ratio is simply brilliant, especially if we consider how many shots he tried. For example, Gareth Bale just had 1 shot on target out of this 3 tries, while James' only shot went off target as well. To keep it simple, Real Madrid's offensive men tried to score 15 times and Cristiano Ronaldo was responsible of 11 of those tries, a good 73%.

But Cristiano Ronaldo was accurate when passing the ball too with a very decent 88% passing accuracy ratio. Furthermore, he created three chances that could've ended in a goal if Toni Kroos' long-distance shots had been accurate.

Overall, it can be said that Cristiano Ronaldo is certainly hitting his stride after a rough start of the season. It should be noted that he did not have a pre-season. The Portuguese player is just 60 goals away from becoming Real Madrid's all-time top scorer, a record that he could accomplish next season if he avoids injuries. Ancelotti has found the way to solve Real's woes, and that is Cristiano Ronaldo. If #7 keeps this momentum going, it will not matter how bad the squad defend set pieces or who's the starting goalkeeper.

All Real Madrid need to do is feed their star player, who's certainly making his case to win his second consecutive FIFA Ballon D'or.