Real Madrid have been in crisis, in trouble, in something like an unlucky streak since the beginning of September. No creativity, no smart style of play, no passion for winning. The team's autumn "achievements" are three lost matches, three draws, eight points behind Barcelona in La Liga, second place in the Champions League group. Still not tragic, but don't you feel a little bit... nervous? 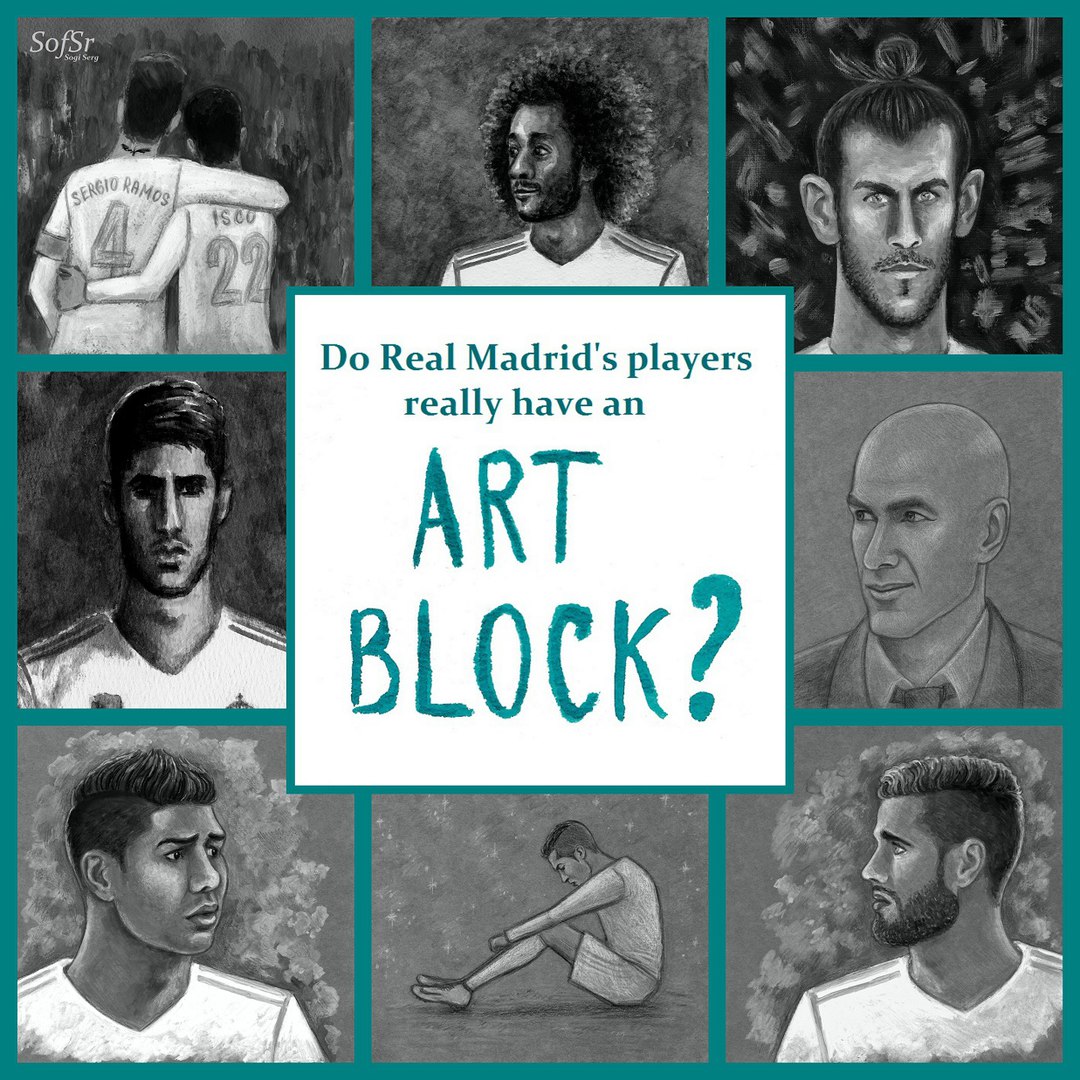 All drawings by me.

Some fans are blaming the players for "bad self-discipline" or "laziness". But I'm sure the players are not lazy or undisciplined. I'm sure they try as hard as they can. For me, this situation looks like an art block. Cristiano is enduring a goalless desert in La Liga, Kroos is making dozens of wrong passes, Achraf is crossing the ball to nowhere, Benzema becomes invisible in practically every match, and so on. The team was unstoppable a couple months ago, but now... it looks apathetic. So, what is happening with the players? Is it really an art block? Let's it figure out.
What is an art block?
Art block is a moment when you are losing your inspiration. It's very difficult to create anything interesting, fresh and colossal during an art block, no matter how hard you try. Recently, I explained it to my best friend like this: "Feeling an art block is like you are trying as hard as you can to break a wall, but nothing is going on, the wall is still there. And you can't find any power to continue breaking it. You used different techniques to break the wall, but it's still there. And now you don't know what else you can do to break it. You feel... so tired and helpless. And then you realise that all this time you were fighting not against the wall, but against yourself." 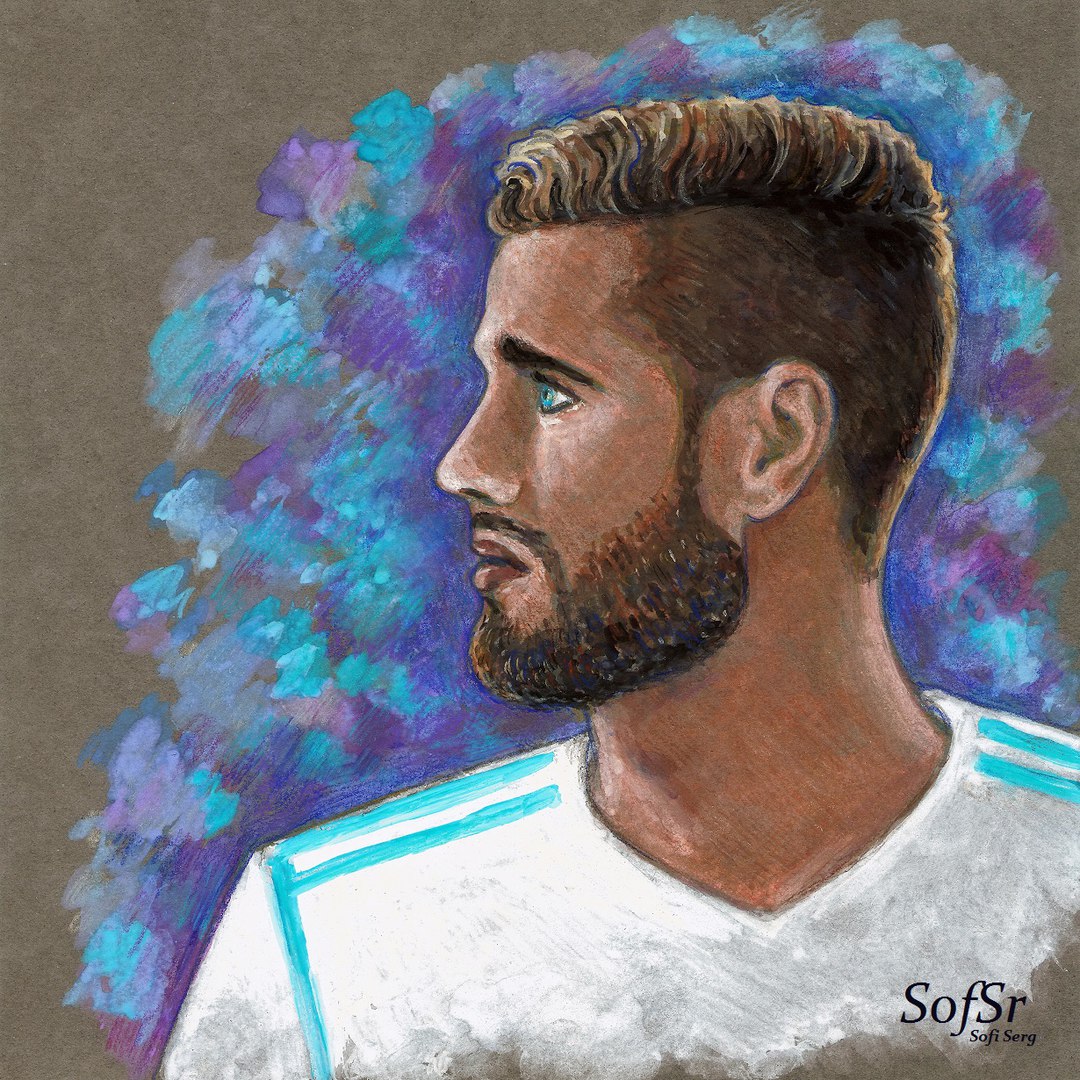 My drawing of Nacho Fernandez during the match against Girona.
Art block is not an illness, but a deep version of a bad mood for all creative people - artists, musicians, writers... and footballers. Football is not just a race to nowhere, it's a clever game, which involves a lot of mental activity, creativity, self-motivation and inspiration.
What induces an art block?
It might come after some big achievements. For example, the victories in the UEFA Super Cup and Spanish Super Cup, or receiving UEFA and FIFA's individual awards. The players accidentally became over-confident due to a good result in every single match and in every tournament. It's time to create something new, but they still use their rote skills. It's time to go to a new destination, but they still think about the previous achievements. It's time to change, but they stopped their own development. 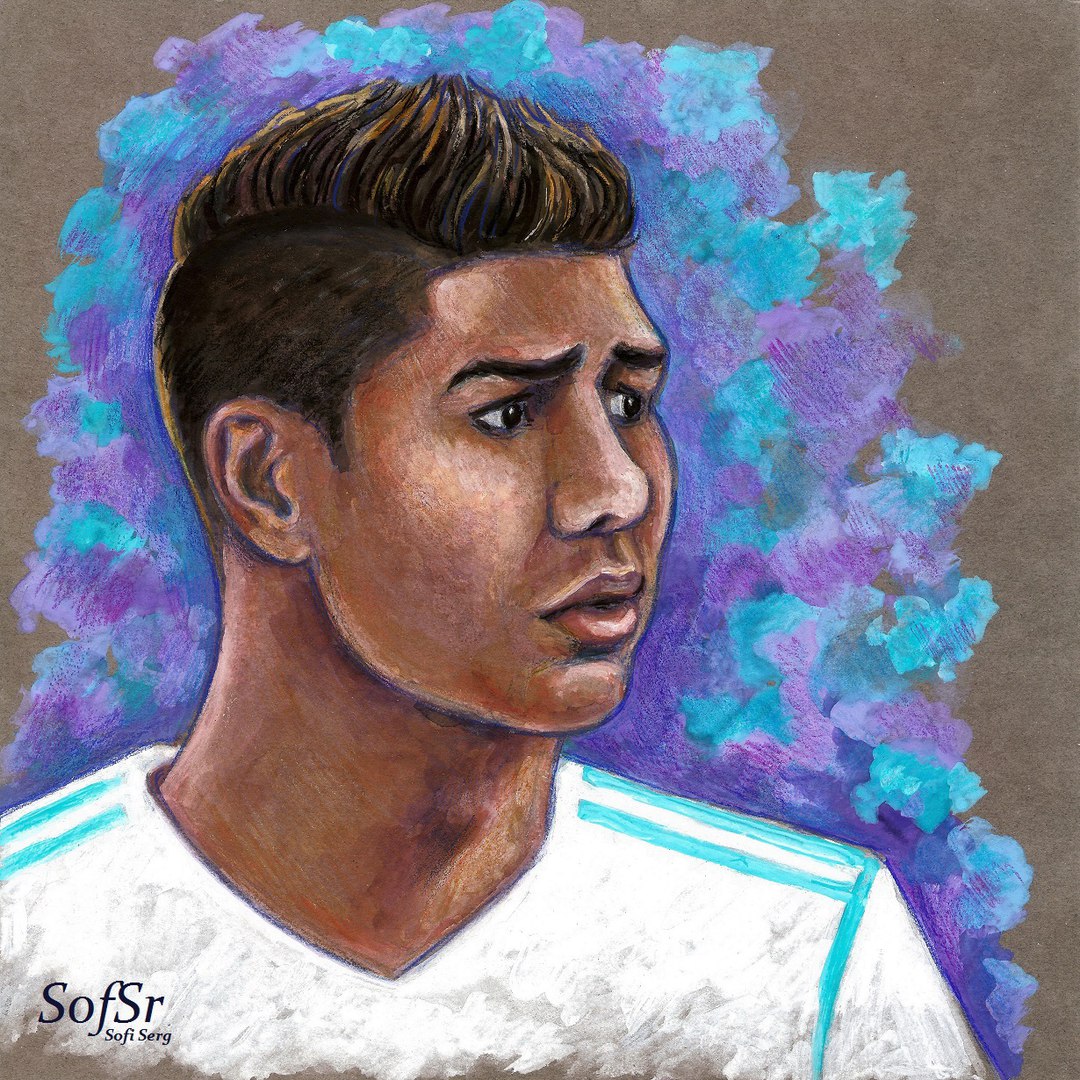 My drawing of Casemiro during the match against Girona.
How to overcome an art block?
The most common option to "cure" an art block is to go out of your comfort zone. Make something you've never made before: use different techniques, travel to new places, meet new people, cross the frames of your imagination, try to experiment, start to look for something that can make a positive impact on your creativity or something that can give you inspiration.
Maybe it sounds strange, but the team has to use these options too. The players have been looking for a new motivation, for an impetus. Now is a favourable time for it: there is the international break this week, so a few players (Cristiano, for example) can take a short respite from matches, and some other players can be more focused on their national teams. It might help them to forget about their problems in their club. 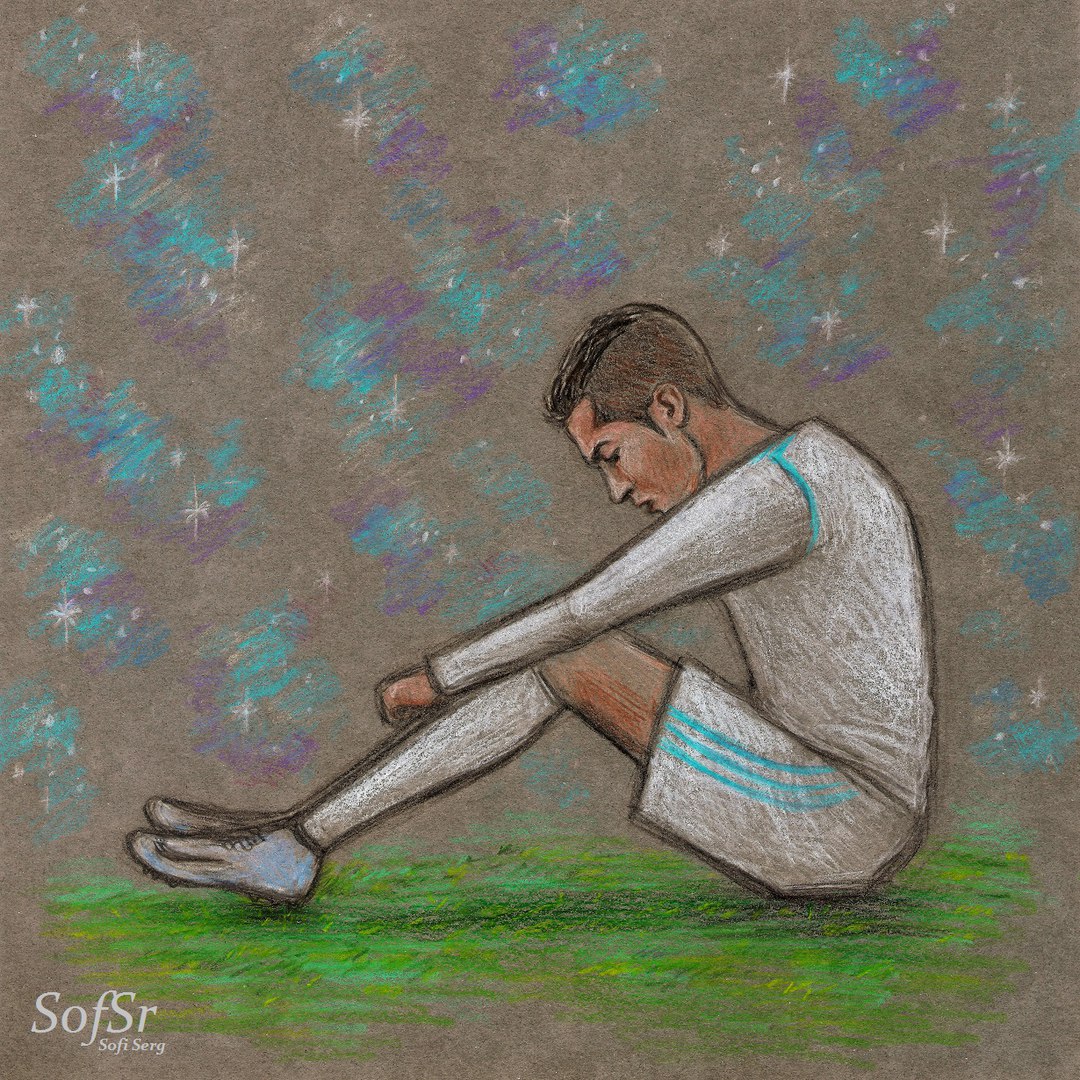 Cristiano Ronaldo during the match against Las Palmas. Drawing by me.
Losing a passion for your life-work feels cruel. It would be great if everyone who has an art block could take a pause for a few months to forget about work, to find inspiration in other things. But the modern world has some rules: artists have deadlines, footballers have matches every three days. So all we can do is continue to break through this apathetic mood, through an imaginary wall.
Let's talk about the team again. Zidane has tons of work now. Which options can he use to overcome the team's art block? What can help him to overcome his own art block? Maybe he can "travel to new places". He was in Moscow a couple days ago (to announce the official ball for the World Cup 2018), so maybe this trip gave him inspiration, who knows? By the way, he definitely used the options called "make something you've never made before" and "try to experiment". I mean, he made a lot of different experiments with the squad and tactics, for example, he put Marcelo and Theo on the pitch at the same time, used young Achraf in some tough matches, and used Marcelo as a striker. 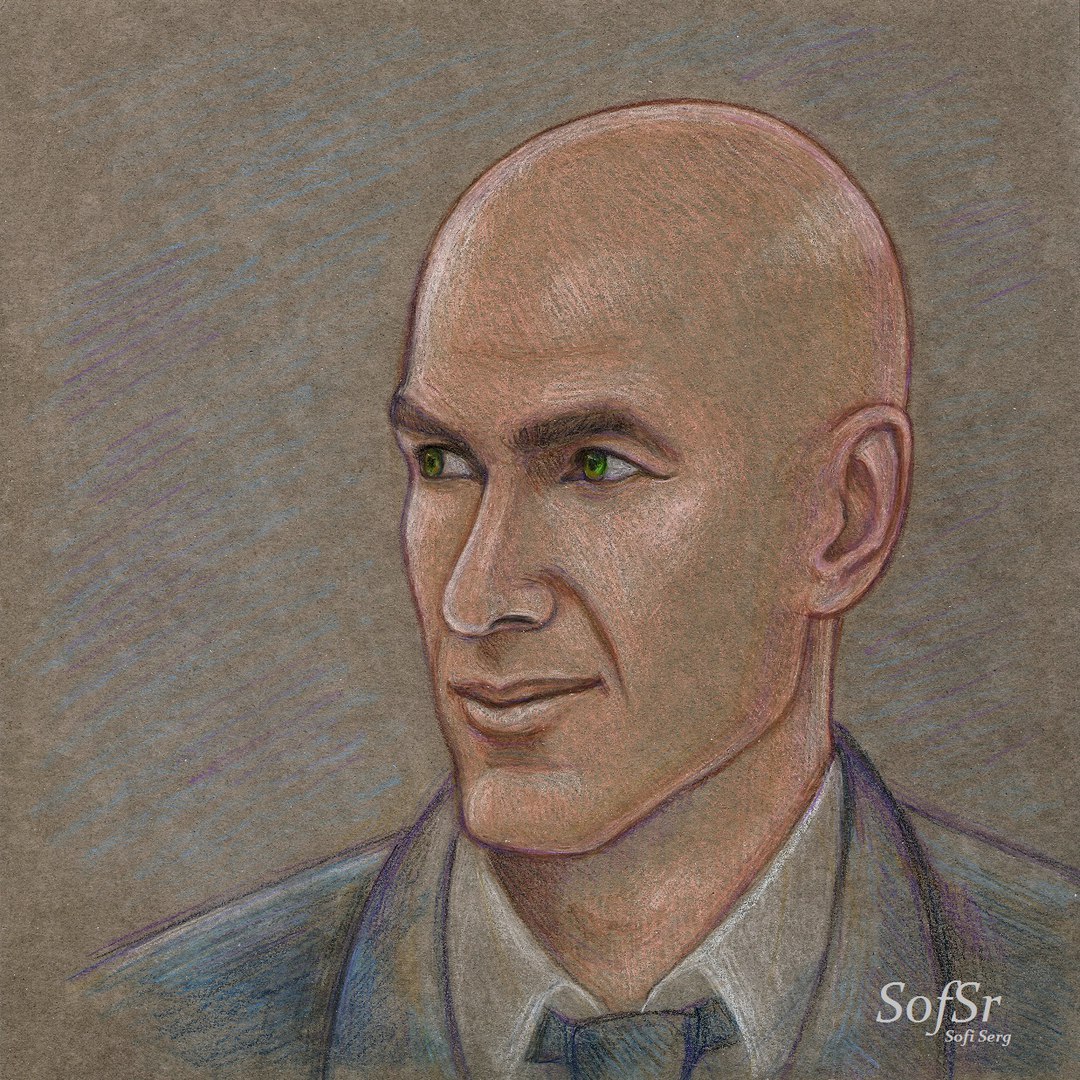 My drawing of Zinedine Zidane.
The problems with the tactics, line-up and game plan need to be solved, but there is something else besides that. Zidane has to inspire the players, give them new motivation, erase their inner problems. It's tough... but it's not unreal. And maybe he has made it already. Maybe he doesn't have to continue solving those problems anymore. Why? Because a few days ago the team finally got a mental impact. Let me explain.
Last Sunday there was the match against Las Palmas. It started as usual, with the same feelings, with the same scenery. It seemed like this match was about to become another victim of the art block. The players looked tired, sleepy, unmotivated, helpless... They tried so hard, tried to score, tried to win, tried to play good, but nothing turned out. They were struggling and nothing was working out until the ball slid to Marco's feet and then... he made a shot, which flew with 100 km/h speed. It flew like a comet above the Bernabeu's pitch. It was so powerful, so sudden. It was like a breath after a deep dive, like an awakening after a long sleep full of nightmares. The team started to play much better after that goal, the fans started to sing much louder. This is the start of something good and right. Thanks to Marco for this flashing goal. This is the best cure for the team now. 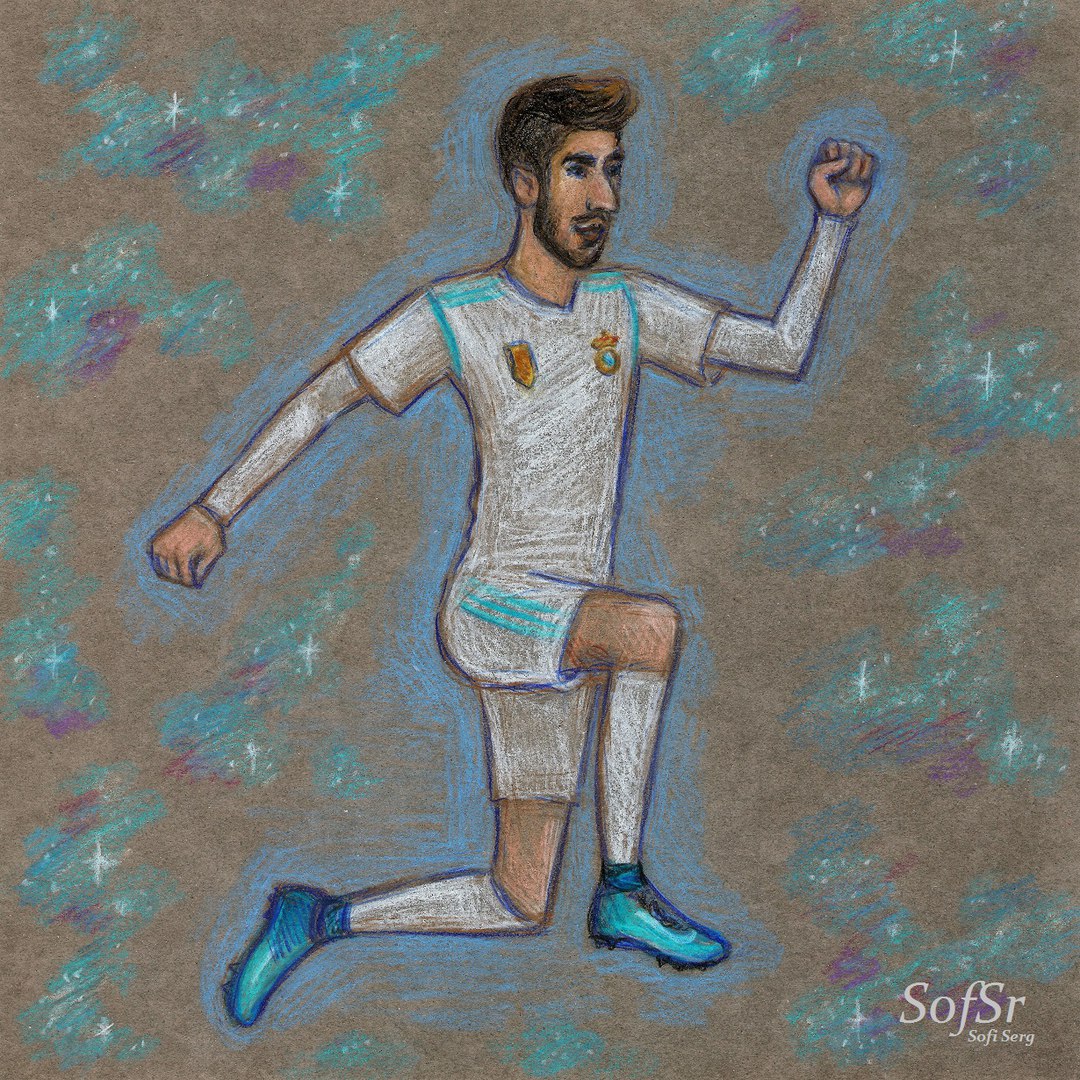 Marco Asensio celebrating his goal against Las Palmas. Drawing by me.
Phew! That's it. I just wrote this article for you and now I feel more inspired and motivated (yes, I'm overcoming an art block too). Madridistas, you are simply the best. You are such a huge inspiration to me. The way you support the team is amazing, you are literally trying to find a solution for every problem in the team. I wish Zidane and Perez would read this website because there are many great thoughts (including "Benzema can't score GOAL" and other legendary ideas) in the articles and comments. You all could be Zidane's assistants!
Anyway, I hope the team's art block has ended and we'll see a great match against Atletico. Hala Madrid!
P.S. I nearly forgot to ask you about something! Have you ever got an art block? What do you think about the team's autumn crisis/art block?
Follow me on Facebook, Twitter, Instagram