During every Real Madrid home match, you can hear the fans' loud non-stop singing, you can spot their raised flags and scarfs, you can see them standing together and supporting the team no matter what. They inspire the whole stadium to be active, they represent the traditions of Real Madrid, and their clothes are coloured only in white. Today I want to tell you about the club's supporters from the south grandstand of the Santiago Bernabeu stadium. 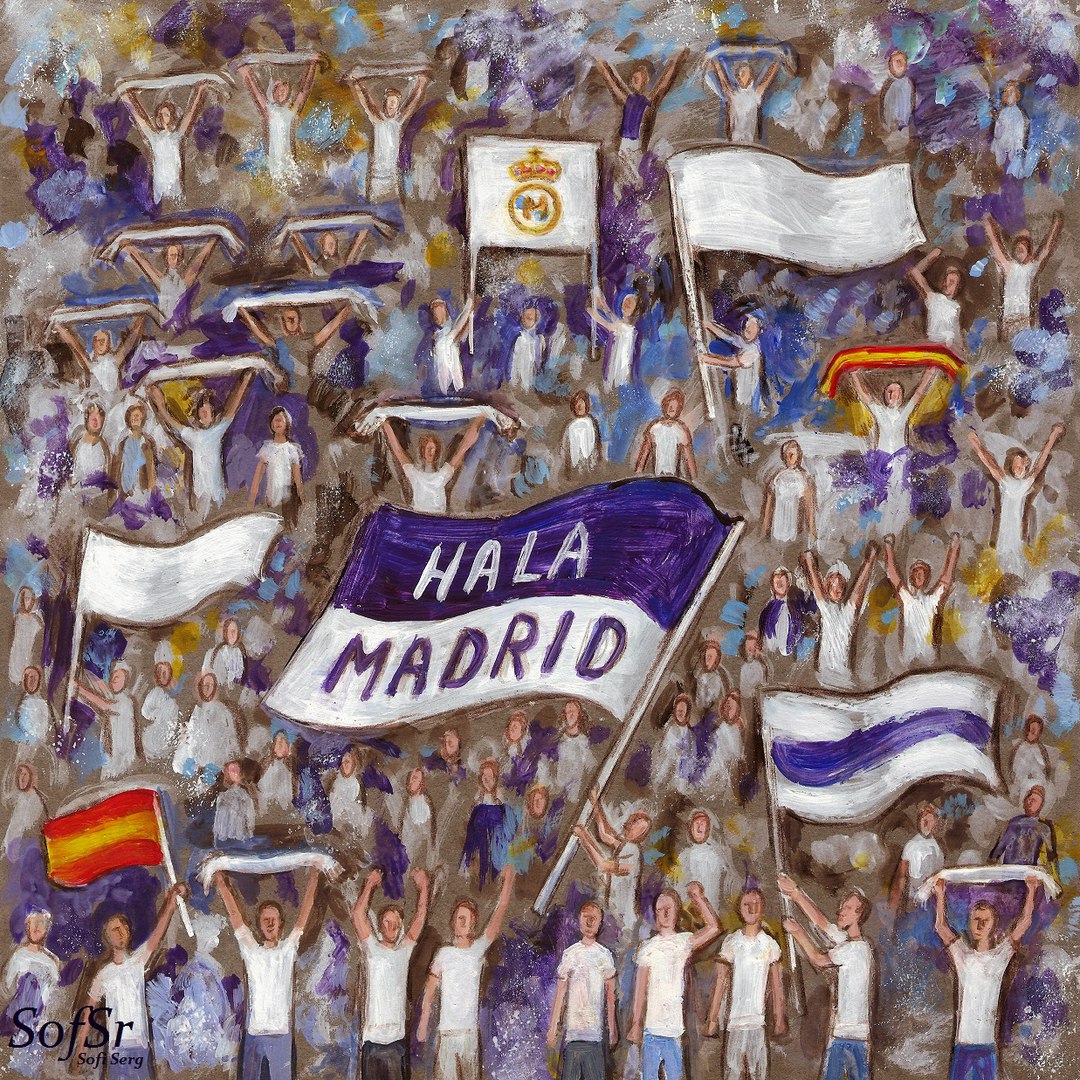 My drawing of the club's active supporters.

The end of the Ultras Sur

It was the end of 2013 when Real Madrid closed its doors to the members of the Ultras Sur (the club's fan group of that time) due to their violence, racism, and political messages in the stands.

The Ultras Sur were Real Madrid's most active fan group since the early 80's. They were located on the south stand of the Bernabeu, which is why the name of the group is "Ultras Sur" (The South Ultras). They were very active, loud, and had a large number of chants. But at the end, the group became too political and aggressive, so Florentino Perez decided enough was enough and kicked the group out of the stadium.

After that, the south stand became empty. The songs and chants died out. But a great football club can't exist without active fans, and it was the middle of the season and the players needed support. So, Real Madrid's board decided to create a fresh group of supporters. 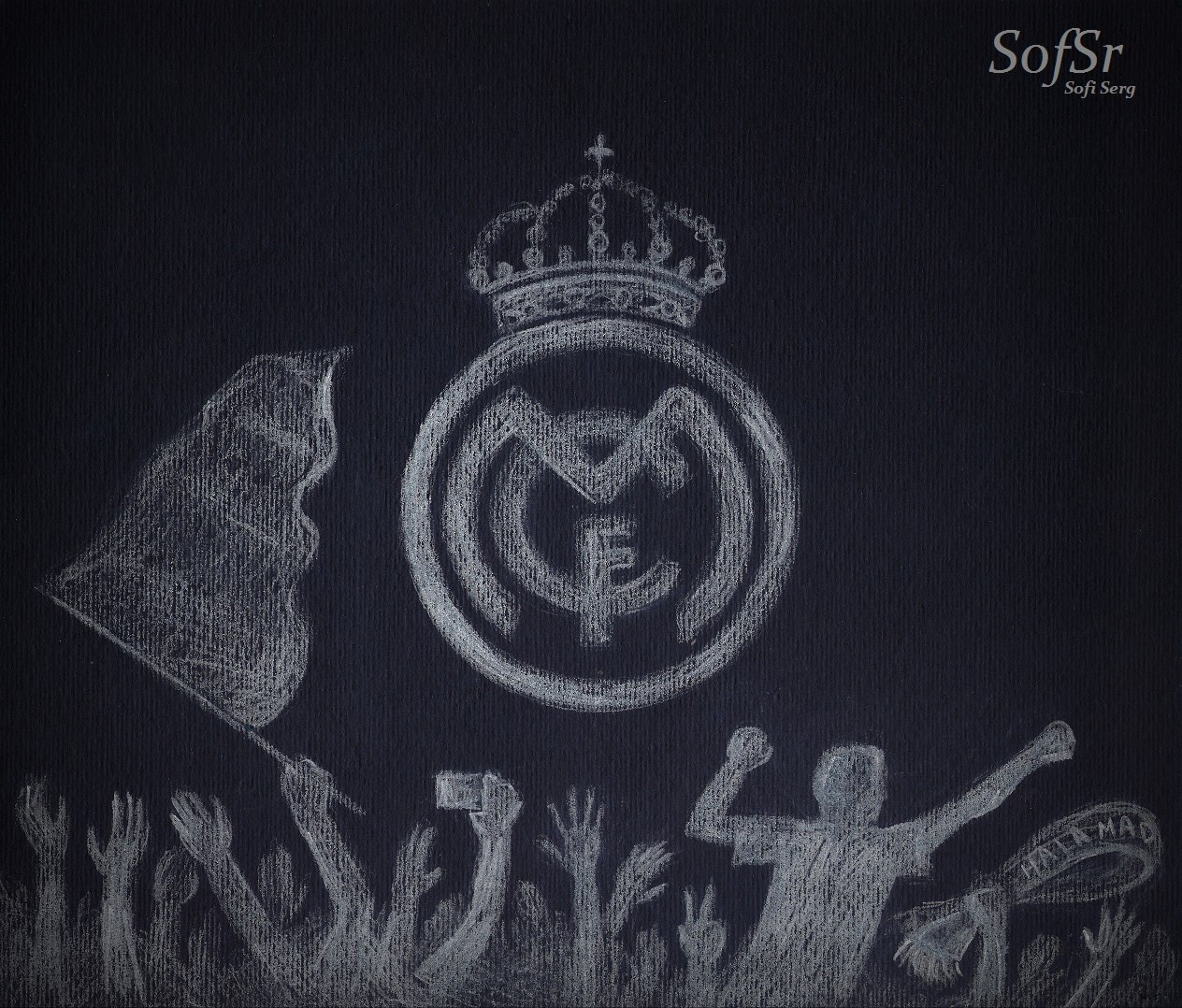 The new group was named "The Youth Stand". Real Madrid's board carefully chose stand members who were between the ages of 16 and 35. The idea was to create a group of young fans, who would support the team without violence, politics, racism, and intolerance.

On 6 January 2014, the Youth Stand made its debut. Real Madrid played against Celta in their first match of the year. The group of supporters seemed quiet at first, but it obviously had some potential. 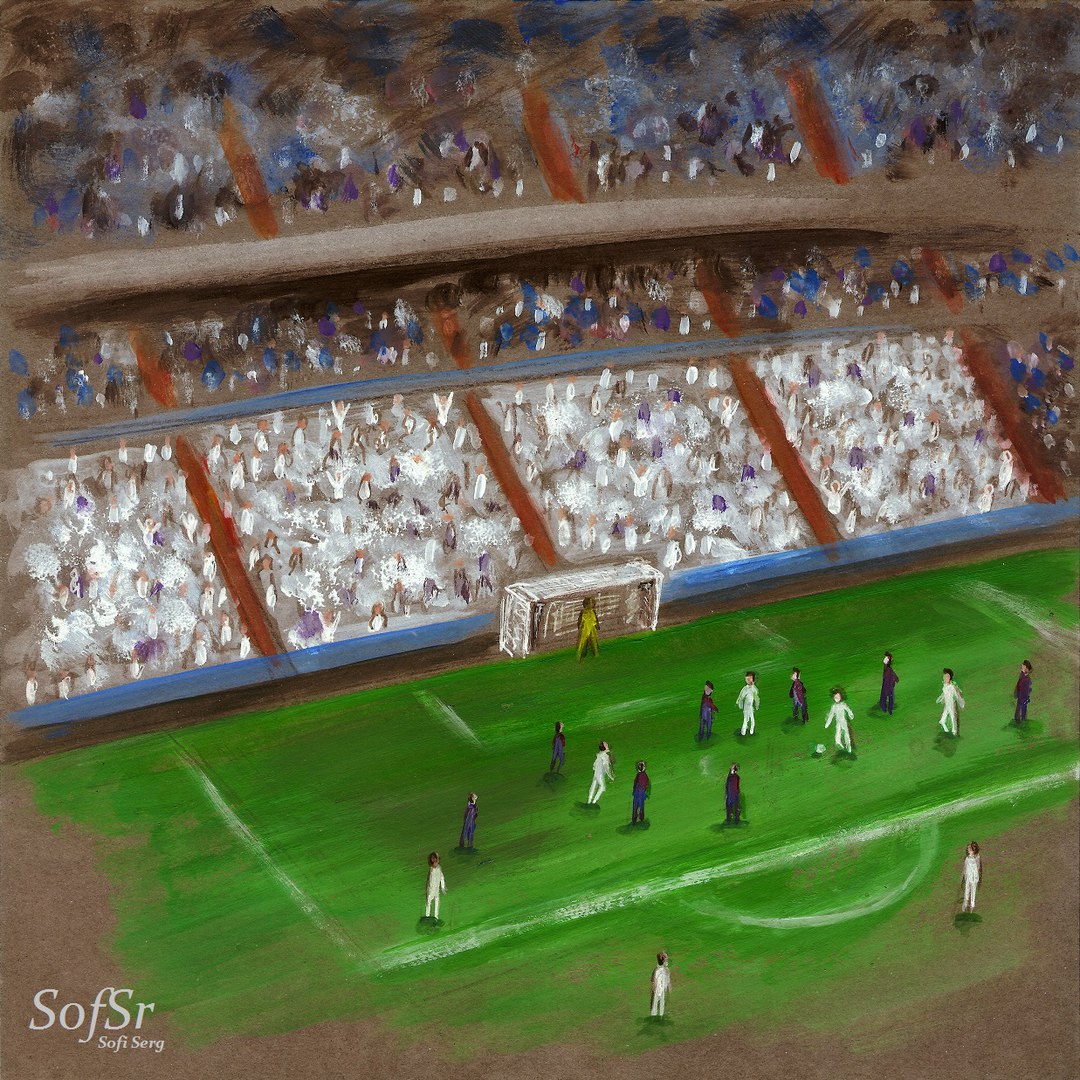 My drawing of the south grandstand of the Bernabeu (Real Madrid vs. Levante, current season).

In the summer of 2014, the Youth Stand gained a big amount of new members and changed their name to "The Grada Fans". The age limit was also cancelled. It seemed like a new era of the stand. But there was one problem; the flags and banners blocked the view to other fans from the upper seats. So, Real Madrid's board decided to move the group from the pitch level stand to the 3rd and 4th balconies.

But it was a strange idea. On TV broadcasting, we could hear the sound of the supporters, but we couldn't see them. That's probably why, in the summer of 2017, the club decided to reconstruct the lower stand in order to put the Grada Fans closer to the pitch again.

You have already noticed that perfect stand in the new season, haven't you? Yes, we are all amazed by it. To be honest, I was quite shocked when I saw it in the first home match of the season. I didn't expect it to look so huge and have so many fans! Yes, the number of the group's members really grew during last summer. And now they sing so loud... That is the group of supporters Real Madrid deserves - on the new grandstand, with the lots of members, with loud chants, and with raised flags.

Today, Real Madrid will play against Borussia Dortmund, which has one of the best group of supporters in football. Dortmund also have the largest free-standing grandstand in Europe with a capacity of 25,000. Yes, I'm talking about the famous "Die gelbe Wand" (The Yellow Wall). 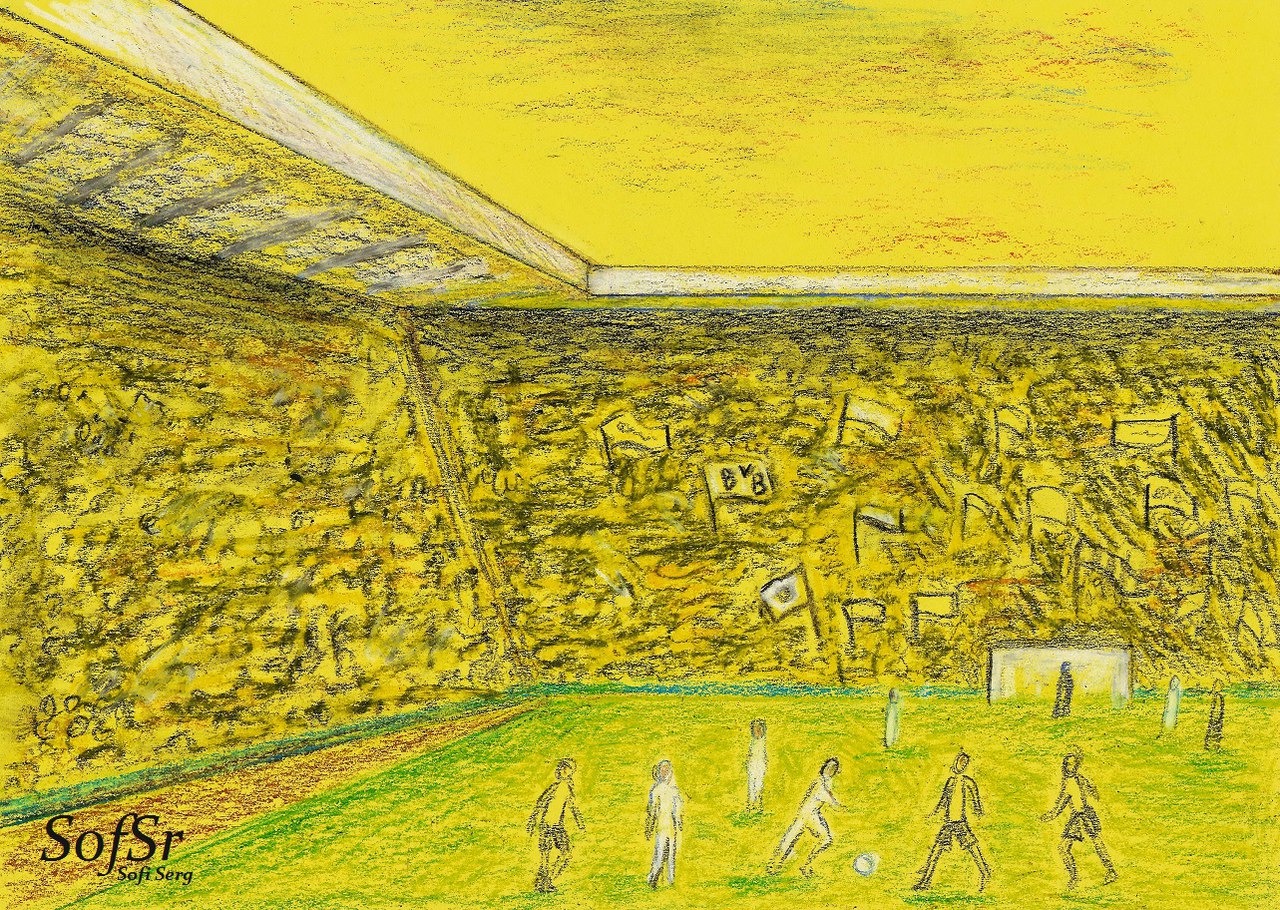 My drawing of Signal Iduna Park.

Many clubs in the world would like to have a stand like that. A stand, where men and women can passionately support and cheer their favourite football club.

At the end of 2013, when Real Madrid decided to create the Youth Stand, they took Borussia's Yellow Wall as a prototype for creating its own group of supporters. At first, it seemed unreal for me. I thought Real Madrid would never have a big stand like Borussia's, because of the different culture of supporting in Spain (and because free-standing grandstands are not allowed there). But now... Just look at the Grada Fans, it's amazing. And it keeps growing every year. 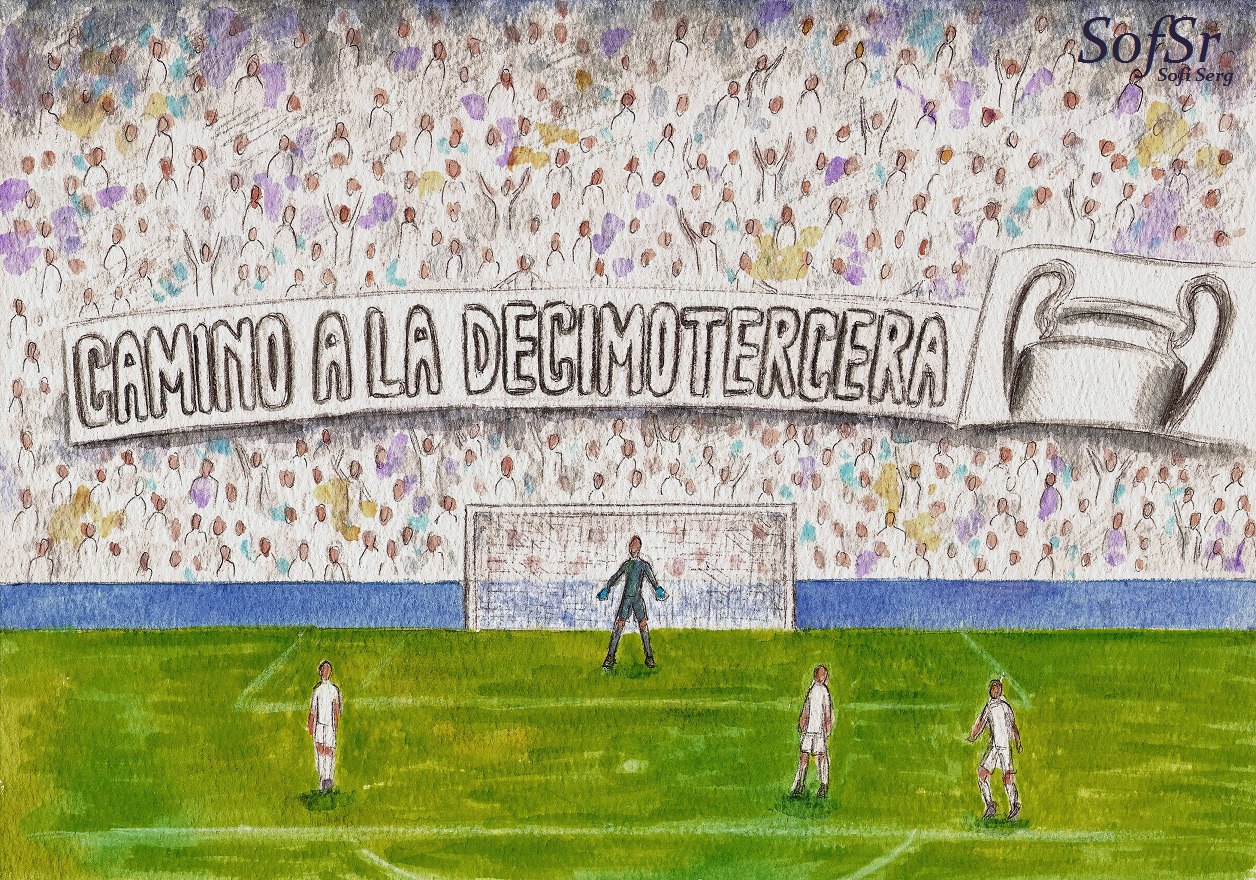 My drawing of the Grada Fans during the Real Madrid vs. APOEL match.

The Grada Fans singing its chants are one of my favourite things about the Bernabeu stadium. The group continues to sing the chants which were created by the Ultras Sur. For example, "Como no te voy a queer" is probably the most popular chant. It was written by Ultras Sur, but, thanks to Zidane, some part of the lyrics change practically every year...

"Como no te voy a querer,

Como no te voy a querer,

"How could I not love you,

How could I not love you,

You are the champion of Europe for the twelfth time..."

But there are also some new chants. In January 2017, the Grada Fans presented a new chant to the Bernabeu called "Yo quiero mi cajón pintado blanco entero". This is my favourite chant so far. It's very touching.

El alma yo me dejo

"Real Madrid, I love you,

The soul is leaving me,

When I come to see you.

No matter, how much time passes by,

In the good moments, or even in the bad!

My father took me along...

To look at the Bernabeu, to see the Champions!

For the day of my death, I want my grave to be coloured in white, just like my own heart!"

The crowd at the Bernabeu is very fastidious and critical. If the team plays bad, some fans start to whistle. This is still a problem for our stadium. This is also probably the bad side of the supporting culture in Spain. The Bernabeu's audience cheers and claps for Iniesta or Ronaldinho, but whistles for Ronaldo or Bale. I really hope this situation will get better with time. 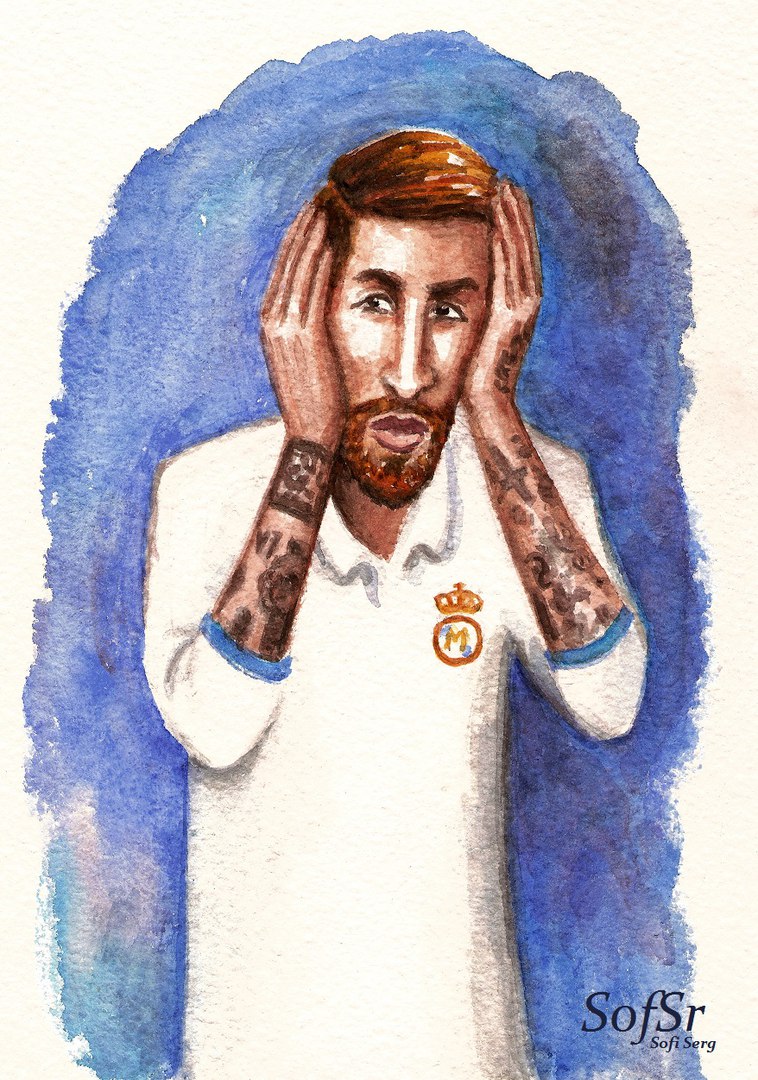 My drawing of Sergio Ramos.

Besides the Grada Fans, there are more organizations of supporters at the Bernabeu. They are called "peñas" and have a smaller amount of members. Their names are: "Primavera Blanca," "La Clasica," "Veteranos," and "Orgullo Vikingo 1992". You can spot their banners on the stands during the matches.

Some ex-members of the Ultras Sur didn't resort to violence, didn't break the rules of the stadium, and didn't have any problems with police, so the club allowed them to go to the Bernabeu. They are part of the Grada Fans now.

I really enjoy watching Real Madrid's home games this season (although the team continues dropping points there). The fans are simply amazing and the stand looks breathtaking. Madridistas were dreaming about this for a long time. I'm sure this stand won't look like Borussia's Yellow Wall, as it will look even more perfect. And I'm sure someday, Real Madrid will have its own White Wall. This club deserves it. This club deserves to have an endless ocean of white which doesn't seem to have a stopping point... 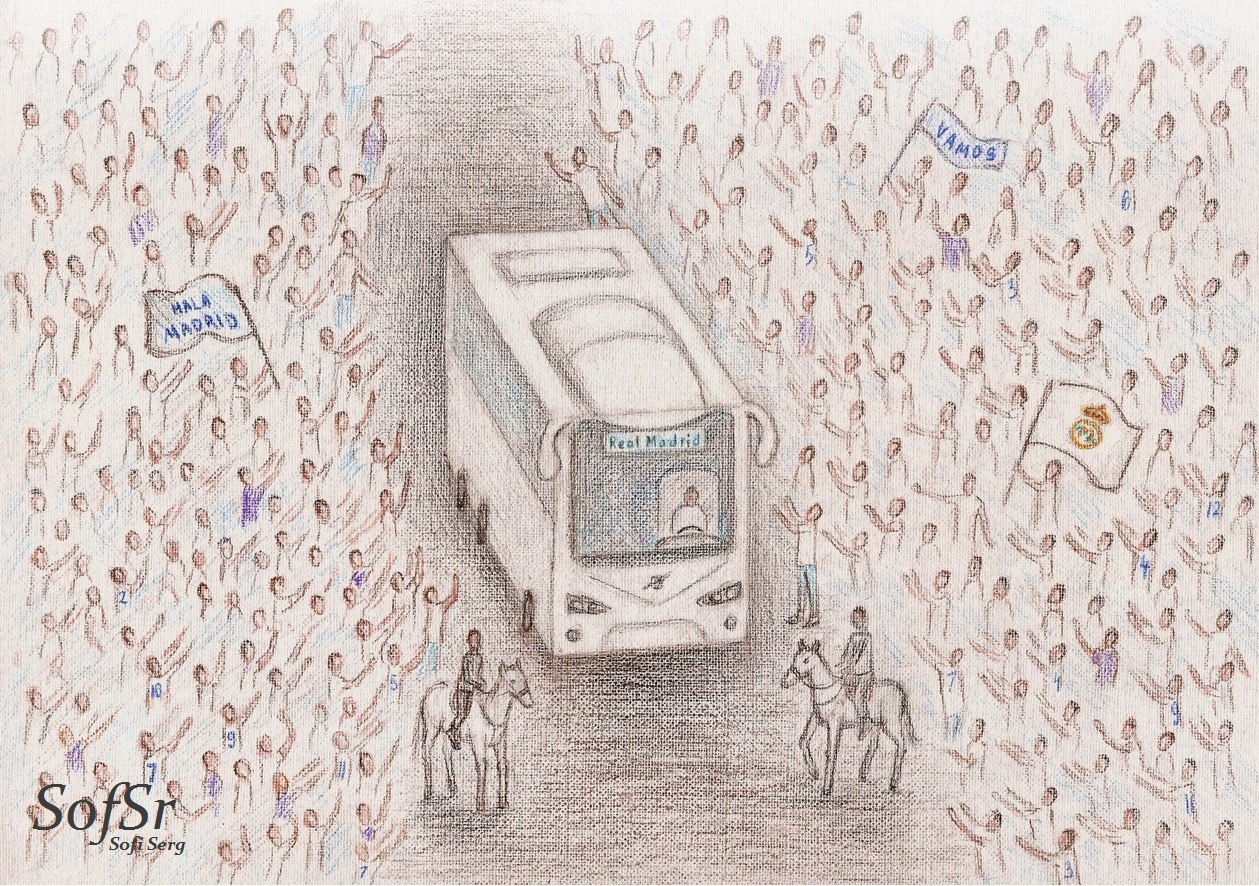 My drawing of Real Madrid's bus on the streets of Madrid before the semifinal match against Atletico.

And here are a couple questions from me! Do you like the stand of active supporters at the Bernabeu? Would you like to join the Grada Fans? Which chants are your favourite?