They got the job done but the performance was a very unconvincing one.

Last night Real Madrid ventured to Türk Telekom Stadium and really, against all odds, came away with three points thanks to a deflected goal from Toni Kroos giving them a 0-1 victory. Yet, while they managed to get the job done it was a very unconvincing performance masked by the score line and Zinedine Zidane’s side have a lot to work on.

First heading into the match, the lineup was as best as it could get with the amount of injured players on the squad including key players such as Luka Modric and Lucas Vazquez.

On paper, Real had the same back four that helped them achieve back-to-back UEFA Champions League titles including Dani Carvajal, Raphael Varane, Sergio Ramos and Marcelo but had some changes up top.

Toni Kroos and Casemiro had their usual spots on the pitch and with the Croatian out, 21-year-old Fede Valverde stepped in. Up front, they had a new line up with Eden Hazard, Karim Benzema and 18-year-old Rodrygo Goes.

In contrary to what the line up was supposed to be, Real Madrid had difficulty keeping a structured formation and as a result had no game plan moving forward.

Nine of the eleven players were often in the middle third of the pitch and 44 per cent of the action from the match cultivated around that space. Only Ramos and Courtois were (relatively) in their correct positions.

The hosts were then able to capitalize thanks to their more systematic and intricate style of play compared to Real Madrid and maintained their formation to grab hold of the game.

Looking at the passing statistics, Galatasaray had more passes at a higher completion rate (84 to 80 per cent) as well as more crosses, long balls and short passes all while maintaining 54 per cent possession.

No structure on the pitch was a problem for everyone but it most noticeably affected the backline. Even though Zidane had a veteran lineup at the back, the four defenders were opening gaps everywhere and inviting Galatasaray forwards into the box.

With Rodrygo on the right wing, Dani Carvajal didn’t have much responsibility up top and for most of the first half, stayed back in his own half but eventually moved up to play alongside the Brazilian and Benzema.

The same thing happened on the left wing. Marcelo often found himself up top playing alongside an already attacking minded Hazard which left acres of space open at the back.

As a result, Varane and Ramos were forced to try and cover everything centrally and on either side of Courtois. Yet, their performances weren’t enough. 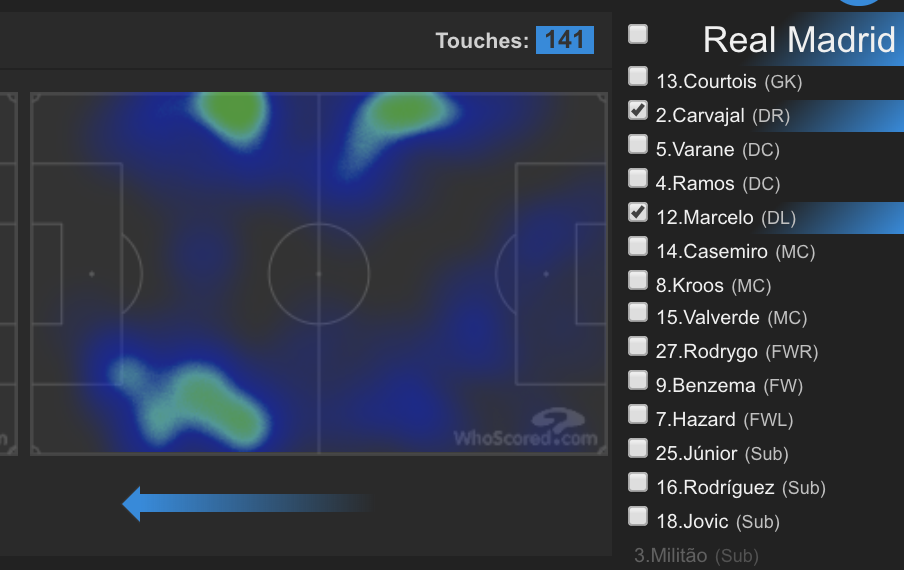 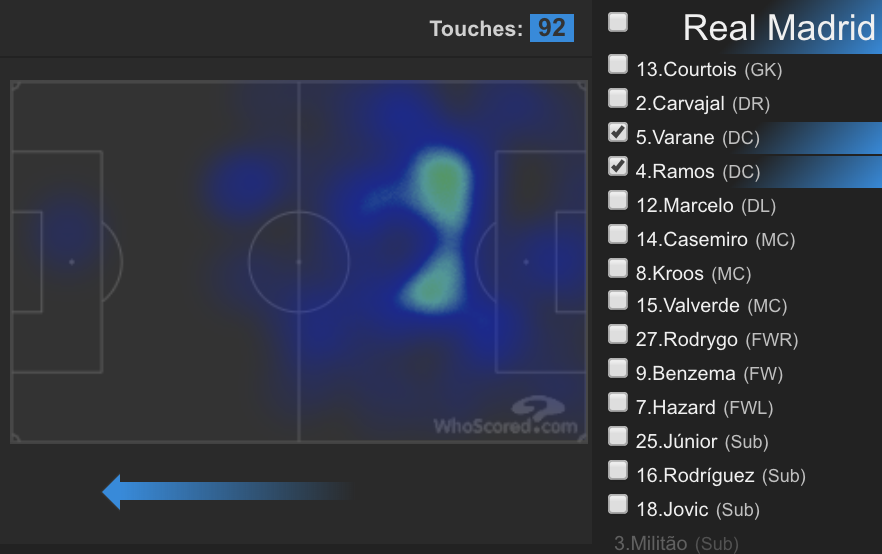 The spacing from all four defenders was all over the pitch, allowing Galatasaray to move into space.
WhoScored.com and WhoScored.com

Ramos and Varane ended the match with five tackles attempted, four interceptions, six clearances and five blocks. In the midfield, Kroos, Casemiro and Valverde tried to make up for it often dropping back to help in support ( also an act of desperate defending).

With virtually no structure on the pitch, there were many chances for Real to concede a goal and frankly their opponents should have scored a couple. But Zidane’s men have one unlikely player to thank for keeping the deficit to zero: Thibaut Courtois.

The Belgian keeper hasn’t had his best performances lately but had a very good one in Istanbul, Turkey, making three crucial saves in the first half to keep the team level. But, it wasn’t just his saves that helped, the goalkeeper was also forced to have a lot of time on the ball with 35 touches, almost the same as Ramos.

Zidane and co. can thank the football gods that Kroos’ deflection managed to find it’s way into the back of the net because none of the players were stepping up and being decisive for their team against an opposition which they should have dominated.

Real Madrid had 27 shots with 14 on target but nobody could put them past Fernando Muslera who made 11 saves.

Most of their shots were straight down the middle and right at the keeper and looked like a training session rather than a match with everything at stake.

Incomers Rodrygo and Valverde were lively and did their best to create chances but nothing really came of it and the attempts from Benzema and Hazard lacked any punch.

The Frenchman was off the mark and the Belgian still looked like he wasn’t 100 per cent confident with his new club, often laying off the ball and hitting the woodwork on an open net.

The German goalscorer was the team’s best player and even by his standards he had a sub par performance with 53 passes at 80 per cent completion and covered the most ground (11.4 km).

Zidane’s choice for substitutes also had limited impact on the game and didn’t do what they were supposed to do; secure the game with another goal.

In the 79th minute, Valverde and Hazard made way for James Rodriguez and Vinicius Junior who both had little to add to the game. Maybe they could have been more impactful as starters but if the team was struggling (just as they were), they were supposed to use their skills to help close the game but fell very short.

Then the addition of Luka Jovic in the -82nd minute for Rodygo didn’t do much either.

He came in on the right side and the team kept Benzema as the striker but the Serbian doesn’t have the ability to work with the flow of the game. At one point he drops all the way back to defend leaving his counterpart alone at the top with no support. This addition also hindered the team’s formation during the last moments of the game instead of benefitted it.

Managing to grab the three points by the skin of their teeth can be a big sigh of relief for Real Madrid but a lot more has to be done if the team wants to be considered competition on the pitch.