Though it was a tough group performance, the match was an insight to some good individual showings.

Even though yesterday’s match against Club Brugge didn’t mean much for Real Madrid’s UEFA Champions League campaign, it was still an important one in terms of looking at the individual quality of the players.

During the last match against Brugge, the team was stunned at the Santiago Bernabeu when the Belgian Club scored two goals within 40 minutes and Madrid had to crawl back to a 2-2 draw.

In the return leg, head coach Zinedine Zidane opted for a dramatically changed starting XI which realistically, would have limited fluidity and impact as a group. In fact, it took until the second half for Madrid to finally break through a tough Brugge side.

This lineup was surely an ambitious one with lots of young players getting the nod from the Frenchman. Luka Jovic, Rodrygo, Vinicius Junior, Odriozola, Eder Militao, Ferland Mendy and Alphonse Areola (plus Brahim Diaz) are all under the age of 26.

So, this match was a good opportunity to show their talent as players and for coaching staff to see how they work with one another. It was also a chance to show how they would make the most of an opportunity. For the most part, they did well, especially individually, but it took a while for the team to actually get rolling.

Hole in the defence

Having nothing to lose, Philippe Clement‘s side was looking to once again take Madrid for a run. Heck, they already did once before.

Right from the start the Belgian side came out with the intention of scoring first and in the first 45 minutes, had 5 offside calls and 4 shots on target. But what let them have the edge on the attacking front was Madrid’s defensive positioning. 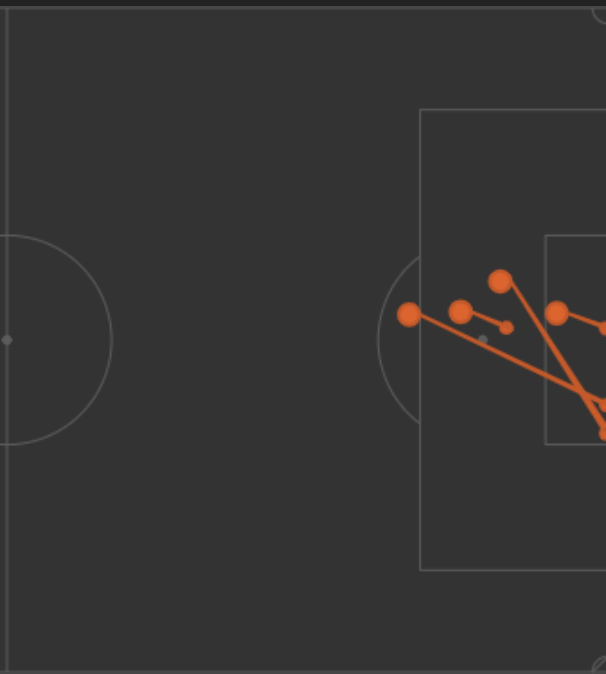 Brugge’s shots in the first half compared to Madrid’s defensive placement.
WhoScored.com and WhoScored.com

With both Odriozola and Mendy playing out wide, Zidane’s men kept trying to help the team move forward and whip balls in from the wings. While that works, Madrid was stretched out along the back and Militao and Raphael Varane were forced to cover all the space themselves (or until Casemiro or Modric came to help).

But while they did well individually, there was often a gaping hole down the centre of the box which was were a lot of the chances were created from Brugge. Having to rush back into position was another reason why Han Vanaken found space to capitalize and score the tying goal.

Good movement through the middle

One of the biggest positives from the match was the movement of the players through the middle, specifically through Isco, Vinicius Jr. and Rodrygo.

But with the attacking determination of these three players, Madrid did well. Each registered a multiple shots on target with the two Brazilians finding the back of the net. Isco was inches away from adding his own in the first half.

For this particular lineup, having these bodies move around and try to cut through the defence was a positive for the team. Though, the negative side was the fact that that Jovic was often isolated and couldn’t link up with players.

A lot of people were questioning Zidane’s decision to have senior players like Casemiro and Luka Modric start the game and eventually bring on Karim Benzema and Fede Valverde.

Now the latter of course isn’t a senior quite yet but having four contenders vying for playing time against Valencia and Barcelona in LaLiga later on this week, they deserved to keep their legs moving with some more work on the pitch.

And, when they came on, the team was flowing a bit better which shows that these young players are doing well but still need some of the experience from the first team to fully get the squad rolling.

Regardless, this match against Club Brugge wasn’t a bad showing. There’s some difficulties when it comes to consistency, communication etc. however those are usual areas of improvement. But for the future, the skill each individual player holds is good, it’s only a matter of time before things start clicking. And really, the youngsters have a lot of time.

See the final stats below.