Martin Ødegaard seems to be a point of controversy for Real Madrid fans, it looks like there are two factions with differing view on his figure.

The first one, views him as a talented young player, with strong character of a leader, technical abilities that set him apart from the majority of midfielders in the modern game and desire to improve and develop in the best possible way. This first group of fans wishes to see Ødegaard as a cornerstone for the new project of the team.

The second one, however, seems to perceive him as impatient, unwilling to fight for the right to wear the white shirt, even of not sufficient quality to wear it. They see in him character issues and claim he DEMANDS to be a starter from day 1, or otherwise he wouldn’t stay at the club. They also claim that the only reason for Ødegaard not having more minutes in the first half of the season was his injuries. 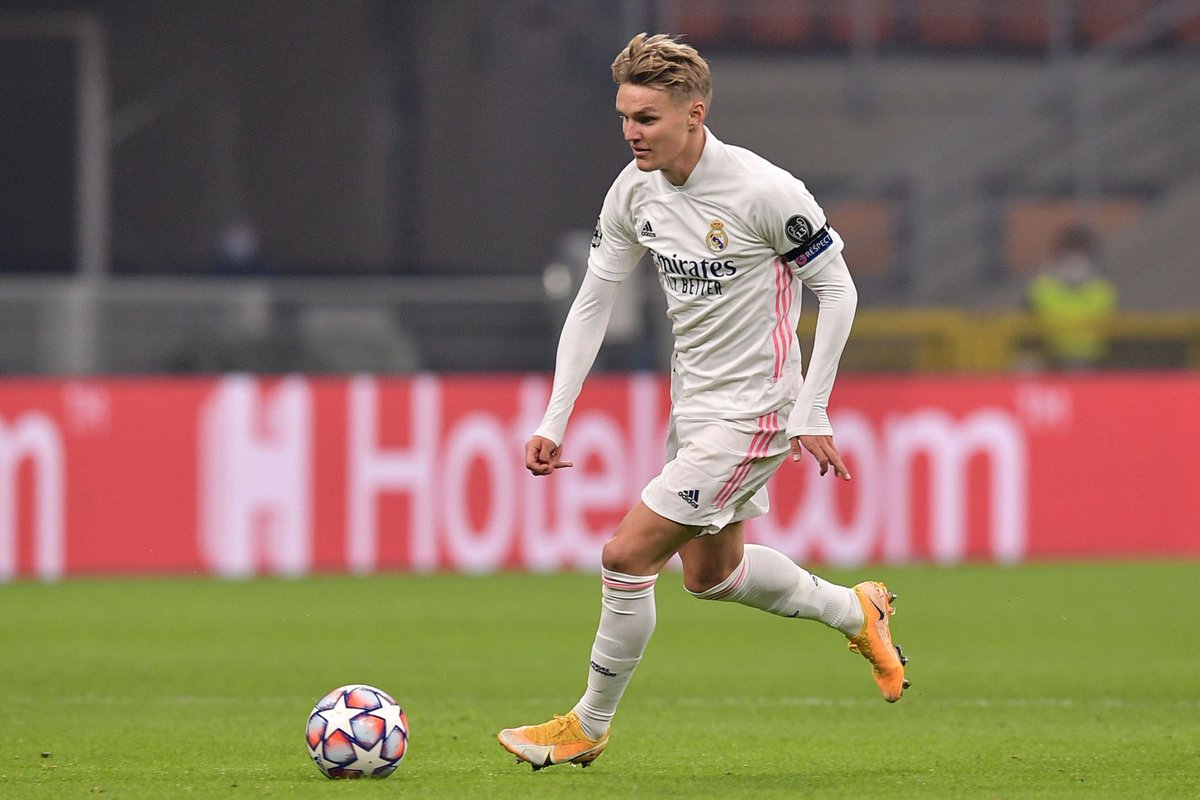 Let’s have a dive into the statistical data and filter how it reflects on these perceptions.

The information used in this article is taken from Transfermarkt.com.

Out of the 19 La Liga games of the first half of the season Ødegaard was in the squad for 13 games, started on 3 occasions, was subbed in in 4 and stayed on the bench in 6. Out of the total of 1170 minutes he played 232. This averages 17 minutes per game, but the distribution is more striking. The bulk of these was made up just by the 3 games he started in, 2 of which were the first two games of the season, leaving a total of 53 minutes for the remaining 10 games in which he was available. This averages 5 minutes per game. What is even more ridiculous is that on 2 occasions he was introduces for as little as 1 and 5 minutes respectively, so we can effectively deduce these from the total minutes and count these games as "benched", which makes it 8/13. What is a player supposed to do for 1 or 5 minutes? This must be some kind of a joke. Then we reach a stretch of 5 games between GW 14 and 18 in which he was available for all but got to play in only 5 minutes out of 450.

Then we reach the breaking point at which the Supercopa semi-final occurred in which he was available but wasn’t introduced into the game despite the team losing, making that 6 games in a row in which he only played 5 minutes, despite being available. Note that in that stretch of 6 games the team wasn’t on the winning side on all occasions, it was actually struggling to score and create chances, something Ødegaard is known to excel. Had he been introduced in these games, there could be a different outcome. That is valid specifically for the games against Elche and Osasuna, as well as the Supercopa semi-final against Athletic Bilbao.

The participation of Ødegaard in the UCL will not be looked into detail, because in truth he was actually injured most of the time and then got some fair minutes there when he was available. But that all happened before the said stretch of 6 games in which he only played 5 minutes. He was injured in the Copa Del Rey game so it will be dismissed as well. 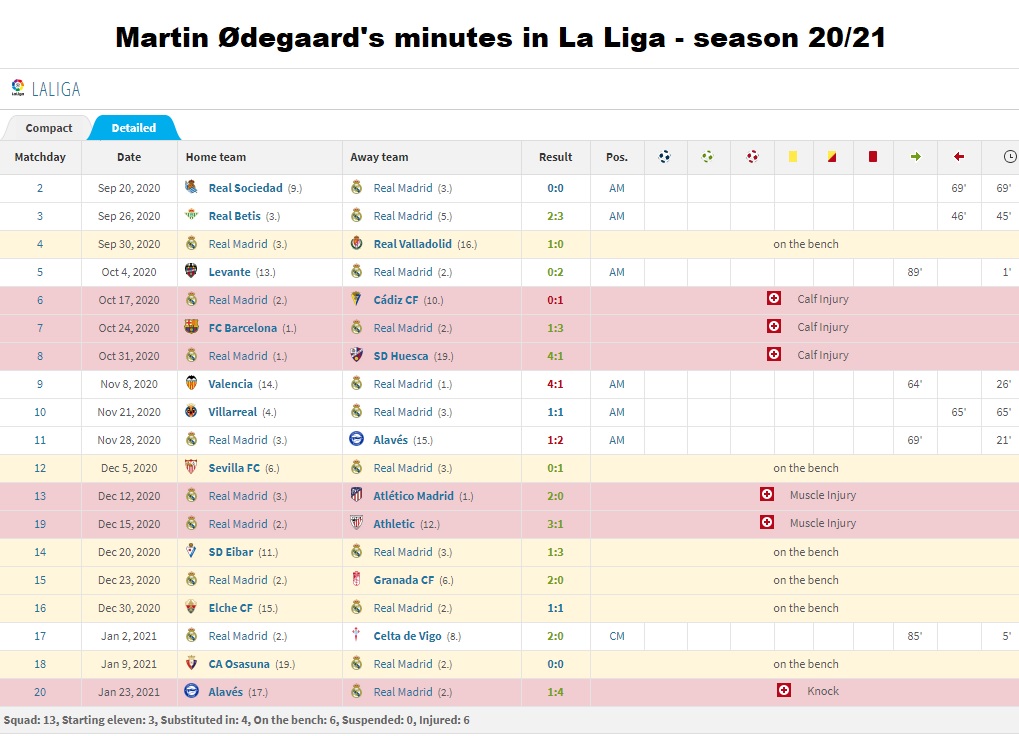 The above stated analysis of data, as well as the observations during the games he took part in, support the argument that Ødegaard wasn’t properly integrated into the team, despite being prematurely brought back from his loan spell at La Real with the promise to provide him with enough minutes to develop. The player has every right to strive for improvement and to desire to play, be that at his home club or somewhere else where he can get regular minutes. The last stretch of games specifically indicates that he wouldn’t be given sufficient minutes to develop in the second half of the season. The minutes he was getting instead of increasing were actually diminishing. Being no fortune teller to predict that a lot of other players will get injured and he will get any chance later on, he had reasonable arguments in favor of a loan move, that would benefit both him and the club, having their asset in the best possible environment to develop and even increase his price in case he is deemed expendable later on.

As opposed to the notion that Ødegaard is impatient, the facts indicate he has been patient for all these 4 years he spent on loans to develop his qualities and be able to make it into Real Madrid. 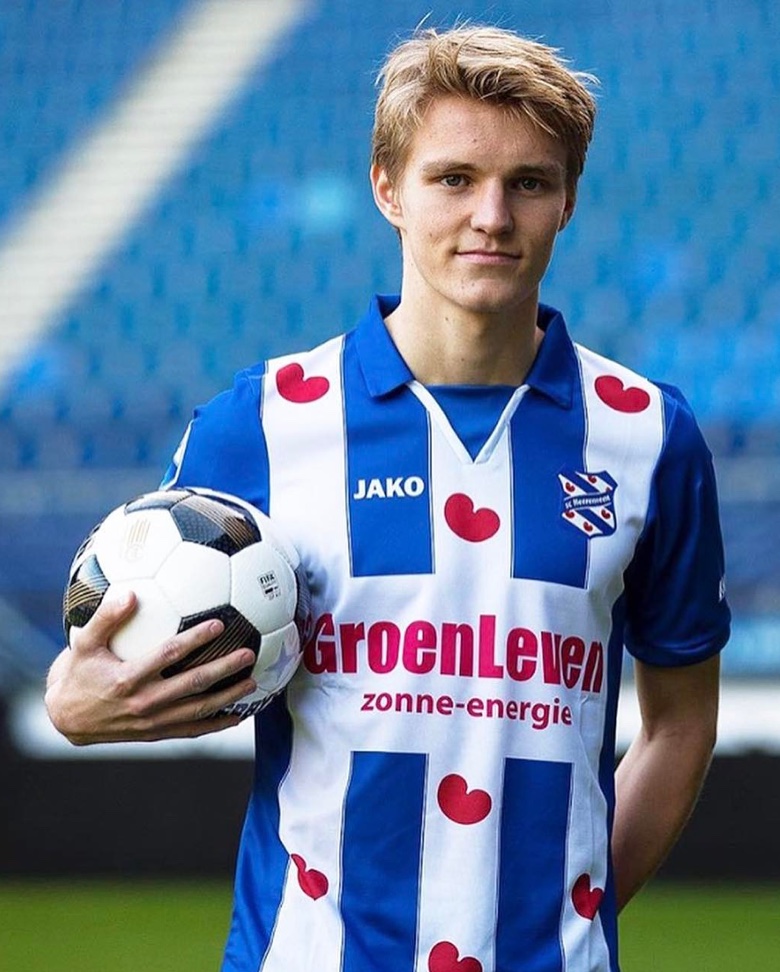 The player never requested to be brought back and forced to "fight for his place" with a club legend such as Modric.

DEMANDING to be a starter and to BENCH Modric in order to play Ødegaard is a far stretch of speculation and interpretation of a complex situation. Attributing him with negative qualities in order to justify why he wasn’t properly integrated seems like an excuse for finding the real root of problems that has been on-going for as long as 3 years, if not even longer.