Gentlemen, the formation for today is Four Four fackin two

There is almost nothing bad to take away from the journey so far. We have always found a way whether we looked bright or not. As any normal team would we have had rollercoaster performances but maintained the result. This team is full of winners and a 9-game winning streak start proves juts that. Can we perform better on a consistent basis? Sure. It all comes down to the system.

Let’s talk about it. Our attacking depth has been a major contention for a long time. The attack (Benzema, Vini Jr, Rodrygo, Hazard, Asensio & Mariano) is usually deployed in a 4-3-3.

Fair to say, the working man can only truly rely on 3 of the above. Furthermore, Asensio is the only one capable of being an inverted right winger. However, this player simply lacks the makings of a varsity athlete. On the other hand, Rodrygo is a goalscoring beast but the RW position can be quite tricky for the kid.

So, a 4-3-3 with these options can almost never function conventionally. It will always be a lop-sided tract which holds no grave consequence but renders it less effective and more predictable for teams to defend.

With Benz out, no other player –perhaps on the planet- can replicate his ability that makes the formation work. He won’t be out for very long, but when he is we need to make sure we don’t look clueless. Mariano has all the makings of a headless chicken and Hazard trying to pull off a redemption arc can be hard to watch sometimes.

On the other hand, the midfield is full of chads. Everyone here is a made guy, they are so fucking badass that we deploy them in other departments. Ceballos is Carlo’s preferred Vini sub and don’t get me started on Fedel Halcon- the best player of our campaign so far.

The Old gods and young dons make a fantastic mix here. Our midfield is the strength of this squad, no question about that.

Here is the gist:

As far as 4-3-3 goes, the attack remains unbalanced and predictable. Meanwhile, a 4-4-2 plays to the squad’s strengths by ensuring central attacking presence, providing necessary width and midfield stability for possession based games or numbers for a defensive mid-block.

Our ideal 4-4-2 fits just everyone. Central figures provide holdup play, linkup, smart movements and box presence. Benzema, Rodrygo, Vini, Hazard, Mariano and Asensio all fit the bill. Benzema is god obviously and Rodrygo can use his lethal skillset suited to the box .

Vini can benefit from this and break the pattern of his touchline hugging since many teams have found it easy to defend by clogging up the flank with 4 or more players. If we play more centrally to feed Vini at the edge of the box, that could be quite groundbreaking.

Hazard can play better centrally and link up play while Mariano occupies central space like a classic box striker to allow his strike partner to linkup and make smart runs. Asensio lacks any upside on the wings, he will look far better in the middle areas around the box.

The midfield will be the backbone for this system. There are two components here: double pivot and the wide flank. Quite obviously, the double pivot aims to control the game and act as the nerve center. Kroos is absolutely perfect for this role as he has played it multiple times and always excels. Tchouemani will be his consigliere providing defensive stability, outlet, and supporting the attack too.

Modric, Camavinga and Ceballos all have what it takes to fit smoothly in these roles.

The wide flanks will be occupied by midfielders who can provide width, stability, control, linkup, energy and smart runs. Modric, Ceballos, Fede, and Camavinga will cook here. Furthermore, these midfielders should be licensed to roam the pitch like marauding CAMs to impose themselves physically like James and Isco in 14/15.

Fede would be absolutely fantastic here and Ceballos too. Everybody says Fede plays as a pseudo-right-winging-midfielder so why not just put him in midfield then. He is a different beast there.

Camavinga out wide might be a bit of a square peg but he will definitely make it his own. Vini can also play as a wide midfielder to take advantage of his touchline ability and devastate the opponent. 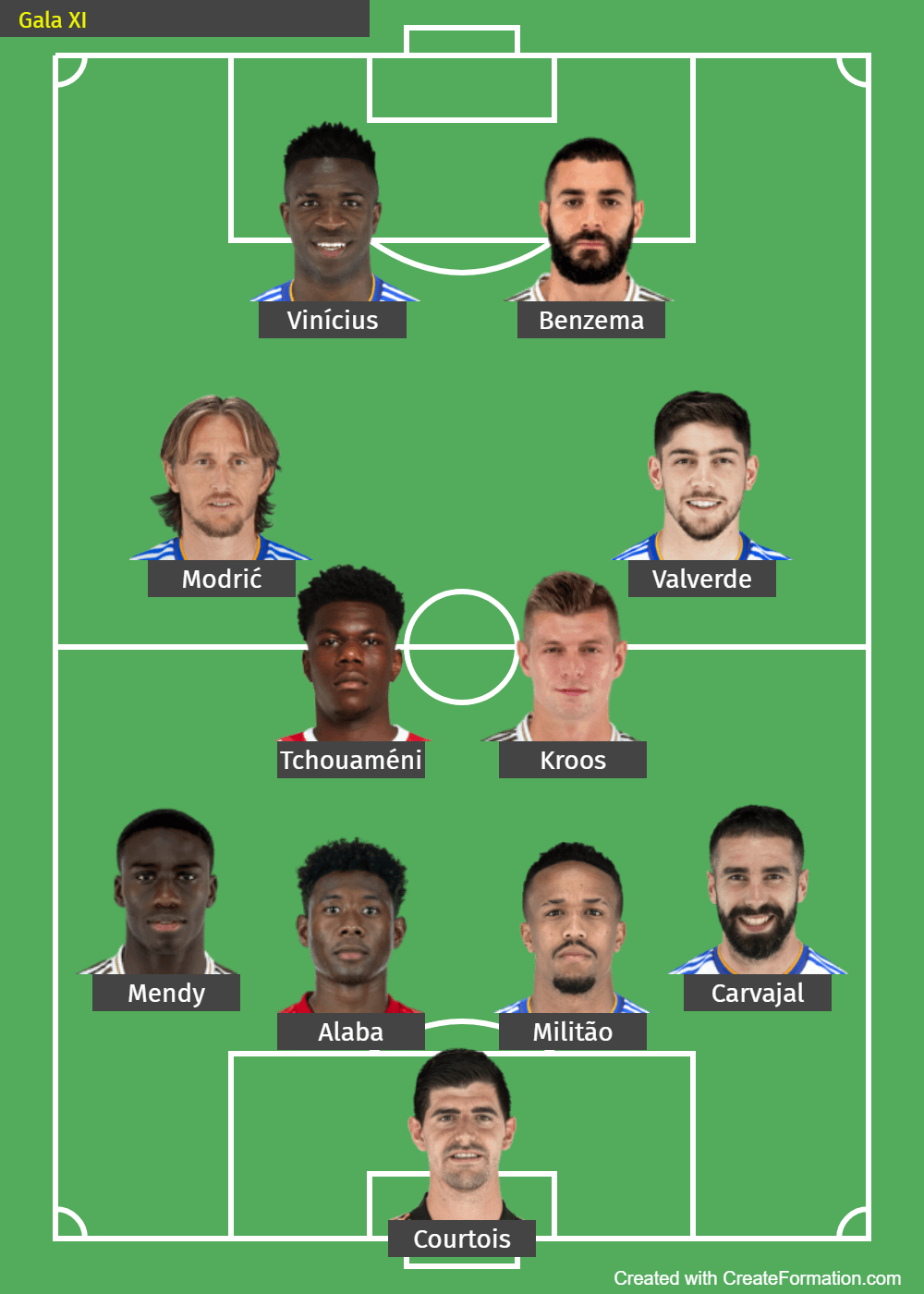 THE GALA XI: Benzini uptop with Tchouemani and Kroos dominating the middle. Fede and Modric roam across the pitch to bash opponents in every way possible. Muy facil.

Lucas V. will slot in as RM, a thousand stepovers never hurt anyone. This could also allow Vinicius Tobias into the team since the RB spot won’t be clogged. Absolutely nobody is ready for that Lord-ViniT linkup. Arribas could also fit in at RM where he drifts from the right to the center.

In my unfiltered non-expert opinion, the 4-4-2 system exploits the team’s current strengths to the fullest with almost no downsides. We have an incredibly overcompensating midfield, packed to the brim. Unleash them.